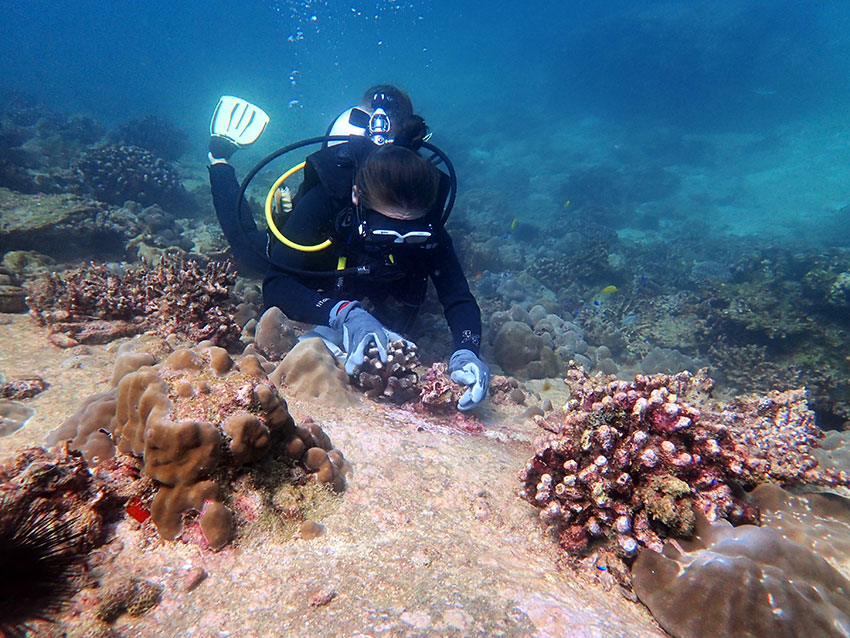 The planet’s oceans are under severe threat from climate change which has recently been identified as the single most palpable threat to all marine ecosystems. The impact of climate change on global coral reefs has been devastating, threatening the livelihoods of millions of people including coastal communities within Eastern Africa and the islands of the Western Indian Ocean. Over the past two decades, coral reefs within the region have suffered widespread degradation through a series of ocean warming events and subsequent coral bleaching. This resulted in an average loss of 90 % live coral cover in 1998 and a further 50 % loss in 2016. In addition to coral mortality, coral bleaching inhibits overall reef health and resilience capacity, coral reproduction and increases disease prevalence.

Motivated by slow post-bleaching recovery rates, the ‘Reef Rescuers’ project was developed to restore the fringing coral reef within Cousin Island Special Reserve. The first-ever large-scale reef restoration project began in 2010 with the financial support of the United States Agency for International Development  (USAID). From 2011-2015, The project built and cultivated 12 midwater nurseries(9 rope nurseries and 3 net nurseries), filled initially with up to 40,000 coral fragments or nubbins (from donor corals and corals of opportunity) of 34 coral species (branching, massive and encrusting). A total of 24,431 corals were transplanted in an area of 5,225 m2 within the no-take marine reserve of Cousin Island Special Reserve. Further financial support was received under the Government of Seychelles-Global Environment Facility (GEF)-United Nations Development Project (UNDP) Protected Area Project in 2011  that supported the transplantation of 2,015 corals in an area of 1,636 m2 at a small bay (Petite Anse Kerlan) within the Constance Lemuria 5-star resort in Praslin. Funding from the European Union through the Indian Ocean Commission supported the cultivation of 2000 coral fragments in a restoration project with Six Senses Zil Pasyon Resort at Felicite Island.

The project has had a very positive knowledge-building impact, with over 60 scientific divers and volunteers trained on reef restoration techniques and the first-ever Reef Rescuers Training program delivered in 2015, with six multinational trainees successfully completing the eight-week training program. A second regional training program from the Western Indian Ocean region was delivered to participants from Kenya, Tanzania, Mozambique, Madagascar, Mauritius, and Rodrigues in 2018. To further disseminate knowledge gained from the ongoing Reef Rescuers project, a ‘Reef Restoration Toolkit’ has been published, highlighting lessons learned and restoration best practices. Further support from USAID resulted in the establishment of the Centre for Ocean Restoration Awareness and Learning (CORAL) on Praslin to act as a national and regional hub for knowledge sharing.

In 2020, we started a new phase of the project to upscale these milestones, which is supported by a grant from the Adaptation Fund through UNDP and the Government of Seychelles through the Restoring Marine Ecosystem Services by Restoring Coral Reefs to Meet a Changing Climate Future project. The project is a regional collaboration between Seychelles and Mauritius to restore reefs using ocean and land-based nurseries, as well as to bolster regional scientific advances and exchanges. The “reef gardening” concept will continue to be used aiming at cultivating at least 50 000 coral fragments to restore at least 1ha of degraded reef around Cousin Island Special Reserve. The project will also look at novel techniques from overseas in coral genetics and reproduction.

Charlotte is a student from Heriot-Watt University (Edinburgh) working on the comparison of stocking techniques to implement the productivity and success of the coral nursery phase.

We have partnered with Coastruction, a company focused on the 3D printing of artificial structures (AS). We are testing materials and shapes to find the most ecological functioning strategy to include the use of AS in the restoration project. If you want to be part of this initiative you can visit the following link and support the project with a donation.

Photogrammetry is among the novel monitoring techniques in coral restoration. We have partnered with an international expert to obtain the best quality of data to study the success of coral restoration over time using advanced technological tools.

We have partnered with Raffles in Seychelles to train international and local staff in coral restoration techniques while actively restoring the reef at Anse Takamaka, Praslin, Seychelles. Raffles has developed a restoration project as part of their sustainability strategy to restore the reef in front of the guest’s beach and to spread awareness on this and other environment initiatives. 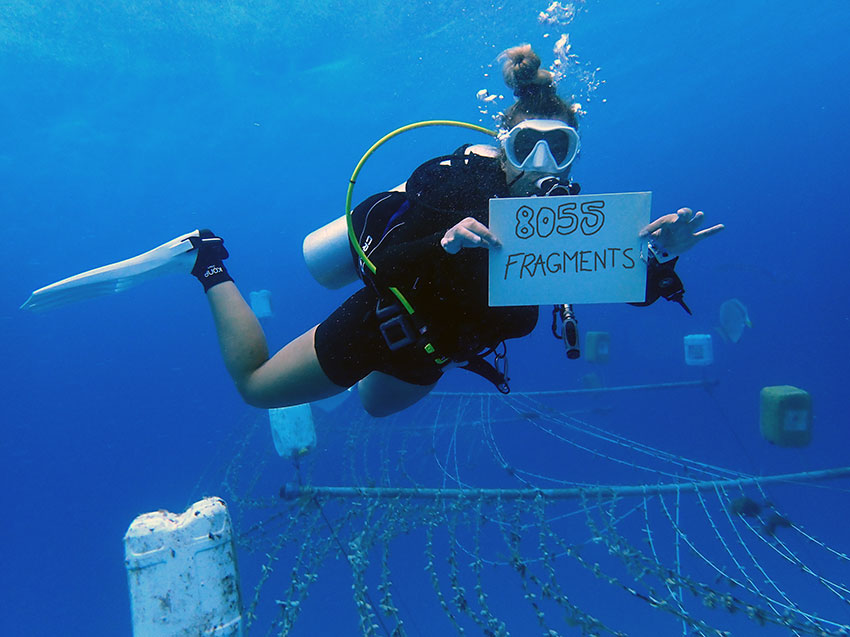 US Navy personnel give back to conservation projects

A day in the life of a reef rescuer

Building coral reefs of the future

Press Release: Launching of project to save reefs from climate change

Further financial support was received under the Government of Seychelles-Global Environment Facility (GEF)-United Nations Development Project (UNDP) Protected Area Project in 2011 that supported the transplantation of 2,015 corals in an area of 1,636 m2 at a small bay (Petite Anse Kerlan) within the Constance Lemuria 5-star resort in Praslin. Funding from the European Union through the Indian Ocean Commission supported the cultivation of 2000 coral fragments in a restoration project with Six Senses Zil Pasyon Resort at Felicite Island.