It’s been a busy few months on the reef rescuers project and it’s getting busier!  So far, eleven underwater nurseries have been setup off Cousin island, totalling about 40,000 fragments of branching Acropora and submassive Pocillopora species growing.

The change of direction of the trade winds from southeast to northwest means it’s time to move the nurseries again so that they remain protected from the full force of the winds.  Five nurseries have already been successfully 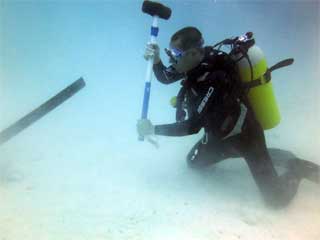 transferred as of the end of October.

Relatively calm conditions are needed to move nurseries, as they are towed behind the boat and a single nursery can weigh up to 1100kg!  Once in place above the new site the nursery is pulled down and fixed into position at its new home.It takes a minimum of two days to transfer a nursery.

Before nurseries can be moved, the foundations at the new site have to be put in place, involving hammering-in of the angle bars to which the nursery will eventually be attached.  Once this is complete, the nursery is prepared for moving: the pipes are reinforced and extra buoyancy and support ropes are attached to ensure the nursery survives the move intact.  Finally the nursery is hitched to the boat, cut loose from its old site and towed to the new one.  The towing can take several hours, depending on conditions.

The reef rescuer boat is up to the challenge of heavy moving thanks to its recent refit with a new engine, and some repair and maintenance work completed last month.

With several of the species of corals in the nurseries already having reached a transplantable size, the final stage of the project – transplantation of corals to the reef is almost ready to begin.  Before the corals are transplanted to their final home on degraded reef around Cousin Island, surveys of the current state of the reef will be conducted to provide a baseline.  This is vital so that we can understand what effect the ‘mass’ transplantation of coral colonies has on the reef ecosystem.

Ideally the transplantation will create a healthy coral reef environment which will be colonised by fish and invertebrates, bringing life to a currently barren section of the reef system.  But that’s still some time away.  In the meantime, work continues apace!