Coral reef restoration in Seychelles should not simply replace the corals that have been lost through climate change but must also build 'reefs of the future' that are resilient to future climate impacts, a group of regional and international coral reef experts have said. The coral experts were attending a technical meeting on coral reef restoration organised by Nature Seychelles in June.
The NGO, with financial support from the United States Agency for International Development (USAID), is attempting the first ever large scale coral reef restoration to be undertaken in the world. It plans to plant 80,000 coral colonies per 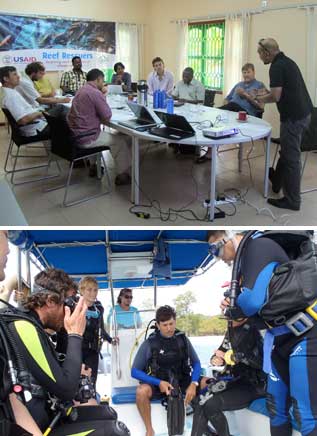 year on degraded reefs  around Praslin Island using the 'coral gardening' method. Similar to silviculture, in reef gardening corals sourced from healthy donor sites are raised in nurseries to required size and are then transferred and 'planted' in degraded sites. Dr. Baruch Rinkevich, Professor at the Israel Oceanography and Immunological Research Institute developed the method, which has been tried in small scale pilot projects in the Red Sea, Philippines, Thailand, Singapore, Zanzibar and the Caribbean.

"Seychelles has at hand a unique case: an opportunity to undertake the first ever large scale coral restoration in the world, a real willingness of the local people to restore the reef, and the ability to undertake this through an NGO which is highly committed," Dr. Rinkevich  said.

During the meeting they reviewed the technical and scientific aspects of the project. Apart from the methodology for restoration, they discussed coral species to be targeted, human resources, and donor, nursery and transplantation sites for the restoration, which they also visited.

Corals in the Seychelles and the region were destroyed by bleaching that causes corals to lose their symbiotic algae resulting in death in most cases. The most severe bleaching occurred in 1998.

"Seychelles damage was particularly bad," says Dr. McClanahan who has worked on corals of the region for over 25 years. "The Seychelles Bank was warmed beyond what most corals can survive. When that happens it's very difficult to get a natural recovery, which is why you need active restoration."

There have been a number of studies and smaller experiments carried out in the region. "But the Seychelles intervention will be at a larger scale and should show how practical it is to restore reefs," says Nirmal Shah, Nature Seychelles' Chief Executive.

If successful this will be an example that many other countries in the region will want to follow, said Drs. Moothien-Pillay and Muhando. Moothien-Pillay has been investigating optimal conditions for growth of various coral species on land based (ex- situ) nurseries in Mauritius, while Muhando  has been involved in smaller scale restoration in Zanzibar.

Dr. Baker, whose research for the past 15 years have helped show that some reef corals are able to survive the effects of climate change, said the project also provided an opportunity to ask and answer some important research questions such as how corals put under stress would fare.

During the meeting various recommendations were made to maximize the chances of success and to meet challenges. One of the challenges will be human resource as this is a resource intensive activity. The experts have agreed to send some of their graduate students to work with those participating locally.

"It is a tedious and costly task. One can never be 100% sure of the outcome," said Moothien-Pillay. "But a lot will be learnt about what can or cannot work."

Healthy coral reefs support biodiversity and marine resources, and the coastal communities that exploit these resources. Dead or highly degraded reefs stop providing this function. Building reefs of the future will help efforts to restore reef functions.
< Prev Next >