The Reef Rescuers Project Coordinator Dr. Sarah Frias-Torres said that the project team managed to find clam-friendly sites to translocate the 30 clams, in spite of rough conditions during one of the missions. Once a giant clam has 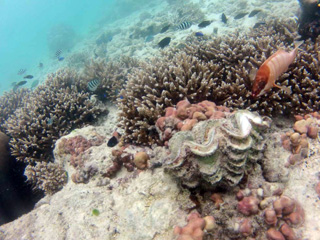 found somewhere in the reef that it likes, it anchors itself and remains there for the rest of its life.

"Rough waves, terrible swell, poor visibility. But we got the job done. It was a test for clam-friendly hideaways: if it didn't work, the swell would kick them out of the selected site. Once we finished, the clams were reopening again. One month later, all but four have survived and they all look healthy," Frias-Torres says. The Reef Rescuers team believe of the four that didn’t make it, two were eaten by octopus.

Giant clams were once common inhabitants of Indo-Pacific coral reefs, but overfishing has significantly reduced their numbers and caused local extinctions. They are listed as 'vulnerable' by the World Conservation Union (IUCN) and their trade is regulated by the Convention on International Trade in Endangered Species (CITES). Some countries have banned the harvesting and trade in the species.

Clam aquaculture, which is widely practiced nowadays, may help to alleviate the pressure on wild populations. Farmed clams can also be used in restocking programmes, in areas where numbers have become severely reduced in the wild.

"Back in the 80's when we started, we took wild giant clams from the reef, had them spawn here at the farm, then returned this parental stock back into the same reef and site they came from," said Roal Nielsen of Black Pearl Farm Ltd.

"The clams here are the offspring of the wild parents. In the late 90's we transplanted over 700 of our aquaculture raised giant clams into the reef as per government requirements, but our transplantation effort was not very successful as we encountered a high mortality rate."

For this reason, Black Pearl Farm were eager to see if the new translocation protocol developed by the Reef Rescuers can safely return aquaculture raised giant clams into the wild. Dr. Nirmal Shah, Nature Seychelles Chief Executive, who was responsible for the initial giant clam aquaculture plan and feasibility study at the Seychelles Fishing Authority back in 1988 and underwent training in the Pacific in aquaculture of these species, says it was always government intention to re-seed the reefs of Praslin with giant clams and with the new methods now developed this is a reality.

Clams are an important component of healthy reefs. “The ultimate aim of our Reef Rescuers project is to restore ecosystem functions of coral reefs, and the translocation of giant clams is yet another building block in place,” says Dr. Shah.