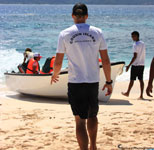 The Minister of Tourism and Culture Mr Alain St Ange visited Cousin on Monday in the company of the Chief Executive and Director of Nature Seychelles Dr. Nirmal Jivan Shah and Ms Kerstin Henri respectively. The Minster said that he and his senior staff were "very impressed by Cousin". He congratulated Nature Seychelles for having "developed the art of managing a reserve that belongs to the birds where humans can visit as guests."

He noted that the island was clean and obviously well managed. He was taken by the knowledge and confidence of the young Seychellois Warden Christopher Mahoune who guided him around. He said "the guide was not only 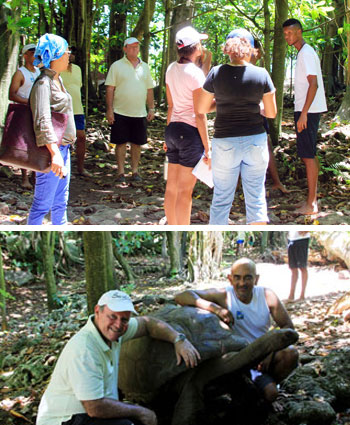 knowledgeable but also knew the island inside out because he could point out where this or that species were." The Minister made the point that Cousin was an important tourism asset and as such his Ministry would support it in any way it could.

Nirmal Jivan Shah, said of the memorable trip: “This was a unique opportunity to travel through Cousin with a Minister and his Principal Secretaries. We rarely get this opportunity. I was very pleased that the Minister viewed Cousin and other nature reserves visited by tourists through a “ tourism and cultural landscape” lens and not only as eco-tourism. The successful marriage of tourism and conservation depends on this holistic and mutually dependent view.”