A Nature Seychelles team working on a project to study fish movement in and the around the Cousin Island Special Reserve has began putting acoustic tags in some Rabbitfish (Kordonnyen). The activity is being done in collaboration with the Seychelles Fishing Authority (SFA). The team of Tove Jörgensen and Craig Syms is using traditional bamboo traps (Kasye) to catch rabbitfishes, tag them with conventional tags and then surgically implant an acoustic tag in the abdomen. They are working with mainly “Shoemaker spinefoot” (Siganus sutor).

"The tag itself is approximately the size of the last joint of your little finger. The fish is anaesthetised using clove oil, a natural substance, the same stuff used for organic toothache remedy, and a small incision made. The tag slides in, 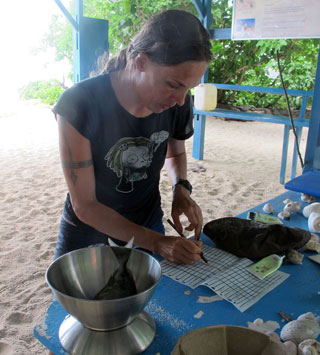 the fish is stitched up - this only requires 3 stitches, and is put in the recovery tank until it’s awake again and released," they say describing, the procedure.

The acoustic tag emits a series of coded “pings” that can’t be heard by the human ear. These codes are detected by underwater listening stations around the island. The code consists of 7 pings. "The first two say “I am a tag!” The next four say “I am this tag!” The final ping says “OK, I’m finished now,” the researchers say.

"As we know where the listening stations are using GPS, and we know how far the stations can detect a ping, we know within 100-200 m where the fish is."

The team is carrying out this activity under a Government of Seychelles/Global Environment Facility/UNDP project that is investigating the role of Cousin as a marine protected area with regard to fish protection.

"Knowing where fishes live, and where they move is vital to managing and conserving species. Some fishes will stay at the same site for their adult life. Others may make migrations to spawning sites. It is important to be able to identify the location of individual fish and their movements," the team says.

"For example, some rabbitfishes may move 4km away from their reef to form spawning aggregations during the full moon. These movements have important management and conservation implications."

Rabbitfishes are an important food, but some of their behaviours might make them vulnerable to overfishing. Understanding their movements and spawning behaviour will result in a better understanding of how Marine Reserves such as Cousin can protect the fish, both for conservation ecology and to support local fishing.