It is a strangely satisfying thing to pull an invasive plant from the ground, watching as the soil gives way and the roots spring free. So is hacking through the thick stem of a vine with a machete and getting it in one swoop. 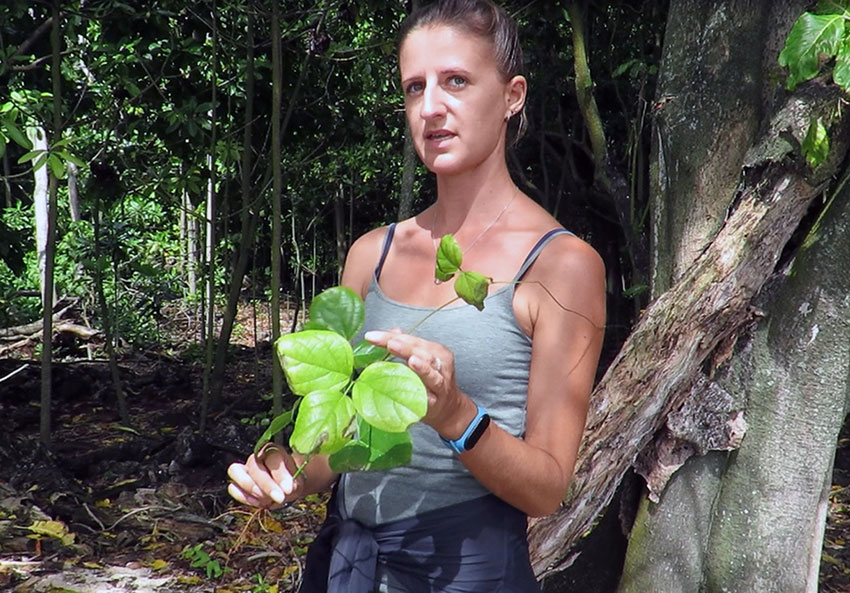 Wild pea is one of the invasive plants removed from Cousin

It would be even more pleasurable if you didn't have a scourge of mosquitoes hovering around your face trying to bite through layers of DEET-strength repellent you slathered on. The rest of your body would be covered in a long-sleeved shirt and pants, unbefitting for our temperatures, but the only way to keep these vampires from bare skin. You soldier on, waving a sarong in front of you in a hopeless attempt to disperse them while uprooting every invasive plant in your path.
Around you the air is thick with activity. Two pairs of hands rip out a young papaya tree from the ground. A papaya tree, you think to yourself, as you calculate the price of its fruit in the shops. Here it is out of place and unwanted. So are the wild pineapples on the Glacis further on, the remnants of the island's plantation days. Wild pea, Passion fruit, Rats tail, Prickly chaff flower, Coconut saplings springing up from fallen nuts, Stinking weed, Rangoon creeper, and Ferns. All are uprooted or felled and placed on the fork of trees where they will wither and die.

After what seems like an eternity, but is in truth an hour, the conservation officer calls for a halt to the annihilation. You depart feeling drained, but elated. Welcome to invasive plants removal on Cousin Island Special Reserve. You either hate it or love it. 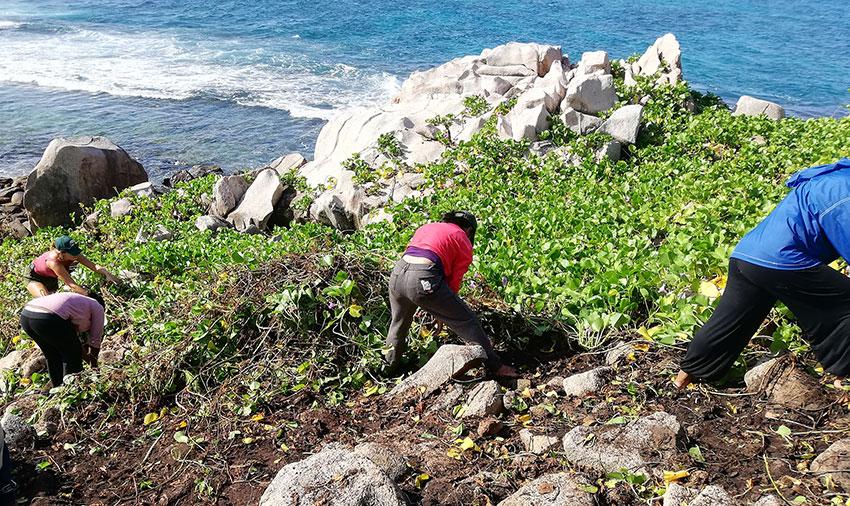 Invasive plants can rapidly take over if left unchecked

Invasive plants - and animals - are species introduced either deliberately or unintentionally into a habitat. They have the ability to establish themselves, outcompete native species and take over environments. Uncontrolled, they can cause habitat loss and the decline of biodiversity.

On Cousin, invasive plants present are predominantly herbaceous. They exhibit high rates of growth and can rapidly smother native vegetation if left unchecked. Their abundance is however considered low-level compared to other parts of Seychelles. A thriving natural ecosystem that is composed mostly of native species is thought to be a good barrier against invasive species.

Although once a coconut plantation, after more than 50 years of conservation, the native forest has successfully regenerated with diverse native vegetation that provides a habitat for various wildlife. The successful conservation of rare and endangered birds on the island can largely be attributed to the intensive vegetation management and its pest-free environment.