I heard the blood-curdling screech before I felt the rapid wing beats above my head. In a heartbeat, webbed feet grazed my head barely missing my face. I quickly ducked and crouched on the path, as instructed, as a very angry bird harangued me for a few seconds. When it quietened, I got up and walked as fast and as far away from it as possible. After I recovered, I looked at what I had disturbed. I had just had an encounter with a protective Brown noddy adult guarding its chick on Cousin Island Special Reserve.

"You can get close to the Lesser noddys, but be careful because the Brown noddys will come at you," Claire, the island's conservation officer, had warned me earlier. I had forgotten this cautioning as I walked up the hill to Cousin's viewpoint, the best place to watch all kinds of birds in majestic flight, but also a niche spot for nesting Brown noddys.

"Must be a female," I said to myself, unintentionally casting aspersions at the gender to which I too belong. I noticed that I had cut myself on Pandanus leaves in my haste to getaway.

Settling down, I saw several pairs guarding their eggs and chicks. On a rock, a pair bowed and nodded at each other in courtship, as the wind carried the ghostly lament of Wedge-tailed shearwaters in their burrows close by. 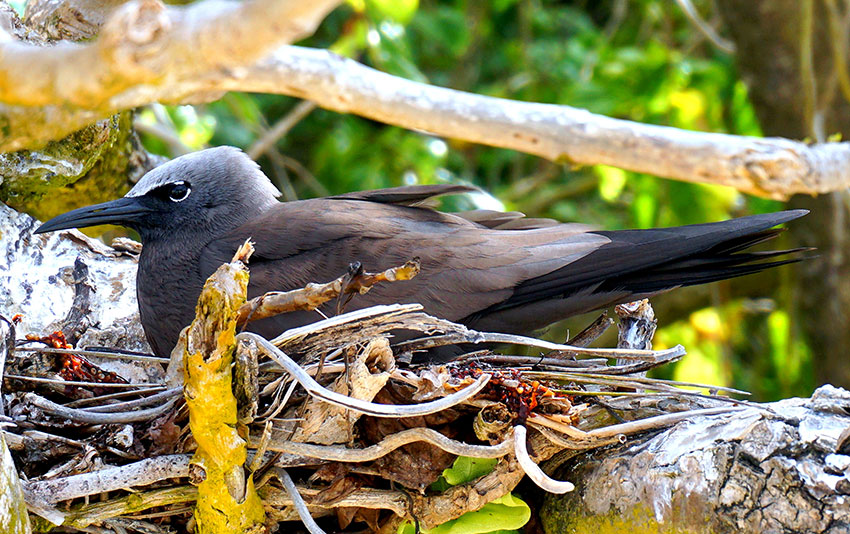 During the South-east monsoon season (May-August), nearly 1500 breeding pairs of Brown noddys (Anous stolidus, Makwa in Creole) come to nest on Cousin Island. They lay their eggs on ledges and shallow crevices of rocks and cliffs, and also in Pandanus trees.

Their nesting season coincides with that of Lesser noddys (Anous tenuirostris, Kelek), with nearly 80,000 breeding pairs arriving on Cousin. During this time, every corner of the 29 ha island is covered with birds. 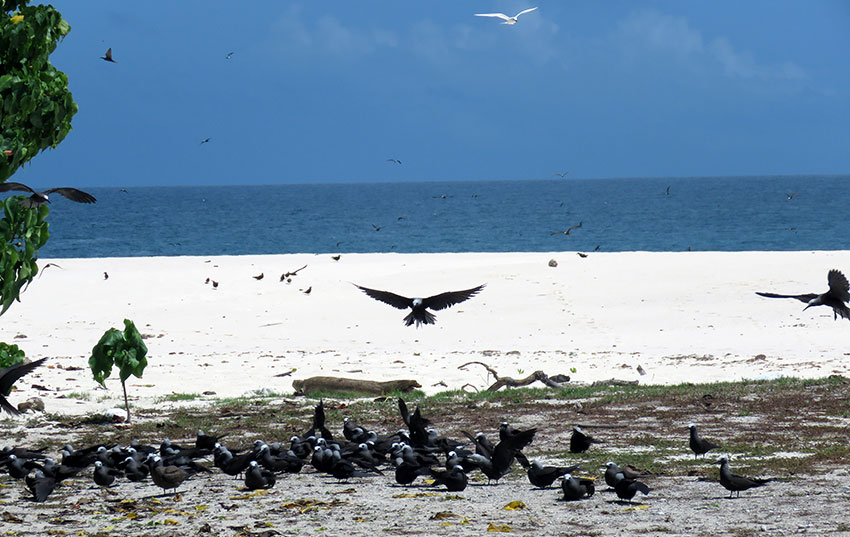 It is the period when their breeding success monitoring and census is carried out using standardised methods laid out in the Seabird Monitoring Handbook for Seychelles. Monitoring and censuses are carried out by the conservation officer and wardens. Seabirds are a critical part of the ocean's food web and can be used as bio-indicators of changes in the oceans. They are abundant, widely distributed, and are in close interaction with their marine habitats including surface-dwelling fish. Their study gives a window through which we can see what is happening at sea.

I start back down the hill. The bird still complains, but I am not alarmed any longer. I discover that both the scientific names for the bird - "Anous" and "Stolidus" - refer to the view that the bird is foolish and easy to catch. Whoever thought that hasn't met this bird!

As I pass one of the warden's houses I see tens of pairs on the roof. What a racket they must make! In the ocean, a flock wet their feathers and picked fish from off the blue surface. I had to admit - they made a pretty picture.