Sunday, 19 January 2020
HomeKnowledge centreNews and Stories“If I’m going to die I’m taking you out with me!”

“What’s that” asked Christopher, a Warden on Cousin Island Special Reserve as the island team was disembarking tourists on the beach. “That” was a Grey Reef shark on the beach next to the Science Coordinator’s house.

At first they thought it had been caught in waves while swimming close to the beach and got stranded, but on closer inspection discovered it was quite dead. The shark had a gaping hole on the side of its head and it was immediately assumed that it had been attacked and killed by a larger shark. 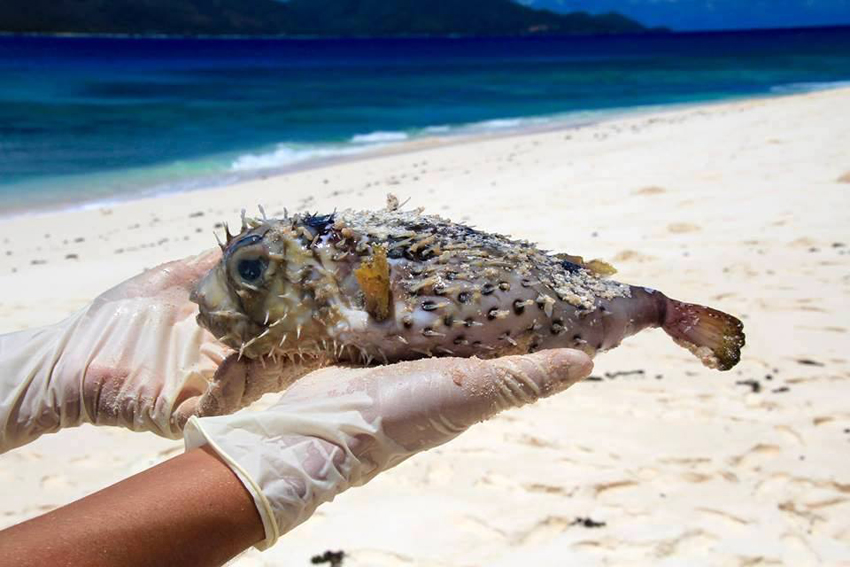 The porcupine fish that started it all (photo by Claire Waters)

Cheryl Sanchez, Cousin Island’s Science Coordinator was quick on the scene and immediately conducted necropsies to determine the cause of death and to see if anything obvious could be seen. First the shark was found to be a female. And, to her astonishment, Cheryl discovered a large, inflated porcupine fish securely lodged in the shark’s’ stomach.

“Grey Reef Sharks are incredible apex predators that eat anything from mammals to turtles to fish, rays and other sharks,” Cheryl explained. “Some have more specific diets than others but in the end they are pretty opportunistic. In this case it's just a case of her appetite being too big for her own good,” she said. 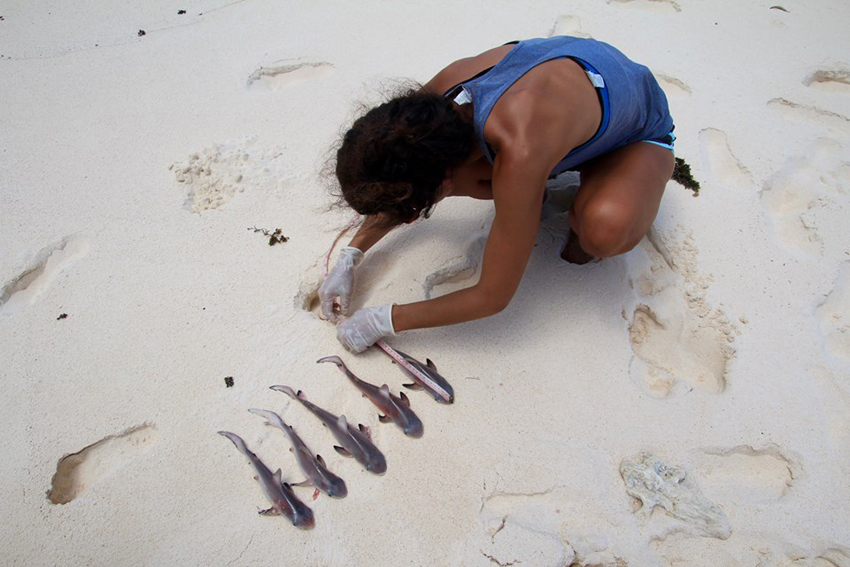 “She must have swallowed the porcupine fish which then, as its normal defence mechanism, inflated itself with the spines pointing out. It couldn’t have killed the shark but may have disoriented it enough for another larger shark to take a fatal bite out of it. In the end both the porcupine fish and the Grey Reef shark died” Dr. Nirmal Shah, Chief Executive of Nature Seychelles says. “I once saw a large eel try to eat a porcupine fish and then giving up after the fish had inflated itself like a balloon.”

Cheryl believes that, judging from the size and nature of the bite, the other shark could have a Bull shark. The 1.75 meter long female was also pregnant – Cheryl found 5 embryos. After collecting as much data as possible from both the mother and her unborn pups, the wardens dragged it into the water between Cousin Island and Praslin where they let it sink.