Sunday, 19 January 2020
HomeKnowledge centreNews and StoriesSocial birds in Seychelles save others in danger

Some animals, such as dolphins and ants, have been shown to save members of the same species if they are in danger. Researchers working in Seychelles have now shown that rescue behaviour also occurs in birds. The results were published recently in the online edition of the journal Behaviour.

The Seychelles warbler is a small songbird with a very special breeding system, where not only the parents, but often also brothers and sisters and grandparents help raising the offspring. Due to the lack of natural predators on the tiny Cousin Island, a nature reserve managed by Nature Seychelles, warblers can reach very old age. The oldest bird became 19 years old. The long-term study on the bird species has already provided many important insights regarding the evolution of social behaviour.

Sticky seeds
Birds on Cousin Island Special Reserve sometimes become entangled in the seeds of the Pisonia tree, Mapou in Creol, which is sometimes called the ‘bird-catching tree’. When these seeds stick to the wings of birds, the bird may become immobilised, which may lead to the death of the bird.

Martijn Hammers and Lyanne Brouwer from the Seychelles warbler research group and Nature Seychelles discovered that Seychelles warblers rescue their entangled family members by picking and pulling at the sticky seeds. They show this behaviour despite potentially risking becoming entangled themselves. 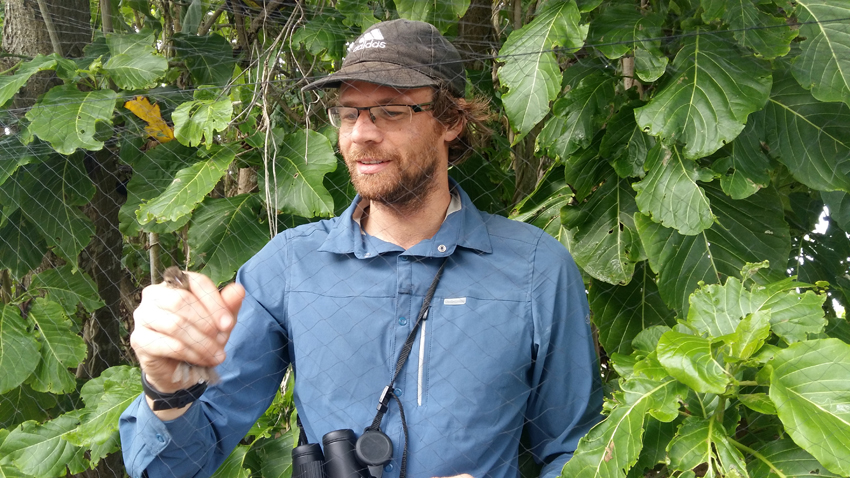 Seed dispersal
The pisonia tree benefits from its seeds being very sticky, because the sticky seeds attach to birds, which disperse the seeds to other islands. Mainly seabirds become entangled in pisonia seeds, but sometimes also small songbirds such as the Seychelles warbler become entangled

Rescue behaviour
In all cases where rescue behaviour was observed, the victim did not have seeds in its feathers on the next occasion.

Martijn Hammers says: “Rescue behaviour is a very special form of social behaviour. The rescuer has to realize that the victim is in danger, identify the threat and show the right action to thwart the threat. Finally, the rescuer might also risk becoming endangered. The fact that animals save others of the same species in danger might suggest that animals show empathy, but more research is needed to exclude other explanations.”

Hammers says: “We expect rescue behaviour to occur in more wild animals, especially in species living in family groups. Also, birds may show such behaviour because it may increase the chance that the rescued individual returns the favour in the future, for example when the rescuer itself needs help at a later time.”

The article Rescue behaviour in a social bird: removal of sticky ‘bird-catcher tree’ seeds by group members was published online in the journal Behaviour. http://booksandjournals.brillonline.com/content/journals/10.1163/1568539x-00003428