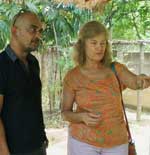 During her visit, Ambassador Villarosa heard about the pressing environmental challenges facing the Seychelles, among them climate change.

One of the largest projects that Nature Seychelles is implementing is financially supported  by the United States Agency for International Development - USAID. Through this support coral reefs affected by climate change are being restored. The project is part of USAID’s strategic global commitments to partner with governments, civil society organisations and other relevant stakeholders to address the impacts of climate change.

"This substantive grant not only supported climate change action in the Seychelles but also brought back USAID to the Seychelles," Dr. Shah told the Ambassador.

The Ambassador heard that the early stages of the project, which involve growing corals  in nurseries under the sea have been successful. The next stage will involve transplanting them onto degraded reefs. The project is being piloted around Cousin Island Special Reserve, which Nature Seychelles manages so that it can be monitored and managed beyond the project lifetime.

Through this peer-reviewed work, which is supported by a steering committee of international experts, Nature Seychelles aims to make a positive and lasting impact to the way we manage, restore and rescue reefs in the Seychelles, in the region and elsewhere around the world, Shah said.

Ambassador Villarosa said she was looking forward to visiting the project base on Praslin Island as well as Cousin Island on her subsequent visits to Seychelles.

Ambassador Villarosa and Mr. Campbell were also taken around the Sanctuary at Roche Caiman and the Heritage Garden - the sites where Nature Seychelles' nature therapy programmes are taking place. The Ambassador was most impressed by the garden and expressed her love for herbs such as Thai Basil, which is grown in the garden.

The nature therapy programmes at both sites are avenues to connect people with nature and are also being used to help the vulnerable and to rehabilitate members of society who are struggling with substance abuse.

The Sanctuary at Roche Caiman holds a wetland, a bird observation area, a centre where yoga and meditation are practiced, and a site where mangroves are being rehabilitated and a new garden is being developed.

The Sanctuary's development has benefited from the US Ambassador’s Special Self Help Fund in the past, with monies going towards securing the area. It has also played host to personnel of the US Navy who over the years have volunteered their time and contributed to different conservation activities on the site.