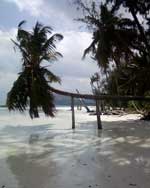 President James Michel has said that the populace should share ownership of coastal areas. The President made this landmark statement recently during his visit to erosion-prone coastal areas. The President said the public cannot rely on government to do everything. I believe this is one of the most important policy statements about management of the environment in the last 30 years.

In the past the policy in Seychelles and the way government officials acted towards environmental concerns have left citizens and groups somewhat sidelined. The top down approach where government was seen as the main, if not the only, actor has been counterproductive because citizens have largely left environment solutions to government. Only very few civic groups have been able to break through and deliver successful and sometimes spectacular results.

The climate crisis is so complicated that, as the President noted last week, government cannot handle the multiplicity of issues by itself. But even the approach taken in the past where civil society is invited for meetings and workshops to seek input is infective because it ends up as passive reporting and endless paperwork.

It is now established in international circles that “people power” is at the heart of the effort to beat climate change. The European Environment Agency, for example said that “the task is so great, and the timescale so tight we can no longer wait for governments to act”.

The answer therefore to protecting and enhancing our environment is in the hands of the many making up the populace not the few in government. That means empowering nongovernmental organizations and businesses to protect and improve the environment and encourage them to use new techniques and innovative ideas

But in reality how can this are done? Can the power be delegated from the Ministry responsible for environmental matters to civil society organizations and does the law provide for “people power”?

Yes, it’s all there. Article 40(e) of the Seychelles Constitution says “It is a fundamental duty of every Seychellois to protect, preserve and improve the environment”. This provides a strong legal right for civil society to be a principal actor.

The specific law that will enable the President’s statement to come true is already in existence since the beginning of the Twentieth Century!  Forgotten by almost everyone is the Coast Reserves and Foreshores Leases Act which provides private leases on reserves along the coast.

We have these and other tools at our disposal. All we need now is the will. The President has set the ball rolling – it’s up to the civil servants to do the rest.

This article first appeared in the author's column in The People 30.9.2011

Photo of falling coconut palm on the beach at Cote d'Or Praslin by Riaz Aumeeruddy.