Almost everybody I met over the last couple of weeks had opinions about the storm surge that battered some of our islands. The dredging of sand off Beau Vallon of course has been debated even in the media.  In a book published by the World Bank, Sida and the Seychelles Government back in 1995 I had predicted that storm surges and coastal development would collide leading to disasters.

Certainly the dredging had nothing to do with the storm surge. This was a storm that has been tracked by meteorologists. It not only affected Seychelles but other countries in the region. In Tanzania for example, it forced hundreds of 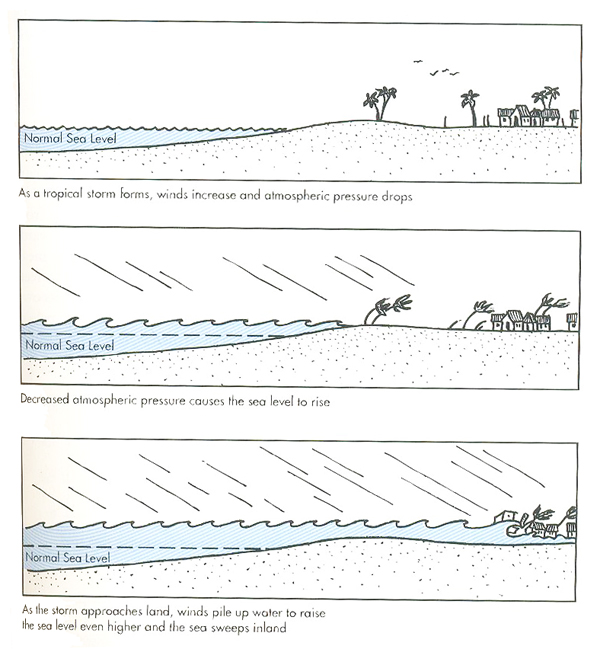 people in Pangani District to abandon their homes and flooded other towns and villages.

In the 1995 publication I had noted that “There is a possibility of an increase in the frequency and intensity of storm surges. The worst scenario would be simultaneous occurrence of a flash flood and a surge in sea level due to meteorological or geological phenomenon”. In this publication I had included a graphic showing the effects of a storm surge coupled with high tide on the coastal zone. It looks exactly like what happened on Mahe recently.

I had also said that “...a fivefold increase in intensity” of tropical cyclones can be expected.” “..there is the likelihood of a narrowing  of the cyclone free zones”. Therefore “the main islands of Mahe, Praslin and La Digue could be in the direct track of tropical cyclones”. All of these statements were based on the best available scientific evidence.

Why did Anse a la Mouche and Beau Vallon take the brunt of the storm? Well they didn’t because there were areas on Praslin and elsewhere that were battered as well. But these places may have variations in coastal morphology which magnify the effects, whist others may be insulated. In fact when the tsunami, a natural geological phenomenon, occurred,  Anse a la Mouche experienced some of the maximum water levels at the  coast as well as what  is known as wave run up.  The tsunami wave surge damage reached a height of 3.5 meters there and it had the longest inundation distance.

But it’s not only that! The worse impacts of the storm surge were seen in areas where infrastructure has been placed on what is known as dunelands or the dry beach. These include roads like at Anse la Mouche where some parts are situated on the dune lands, and buildings and walls such as those at Beau Vallon built on the dry beach.  Climate change impacts on these types of unwise coastal developments could lead to more disasters in the near future.

We have put ourselves in the way of forces that no one can control. The best we can do is to plan new developments according to that famous set-back line we always talk about but few respect. And as for the older infrastructure they need to be moved back or some abandoned if possible.

Originally appeared in author's column in The People, 30th March 20102