April 29th 2011 - Seychelles and Mauritius have received official notification from the Secretariat of the United Nations (Division for the Ocean Affairs and the Law of the Sea, Office of Legal Affairs) that following a Joint Submission both countries will now have jurisdiction, as provided under the United Nations Convention on the Law of the Sea (UNCLOS), over an extended Continental Shelf of 396,000 sq. kilometers in the Mascarene region outside the border of their two respective Exclusive Economic Zones (EEZs).

Between 1977 and 1978, the Seychelles staked its claims to its territorial waters and EEZ A new Maritime Zones Act was enacted to be in conformity with UNCLOS which had come into force in 1994. Under UNCLOS every coastal State gets a 200 mile continental shelf 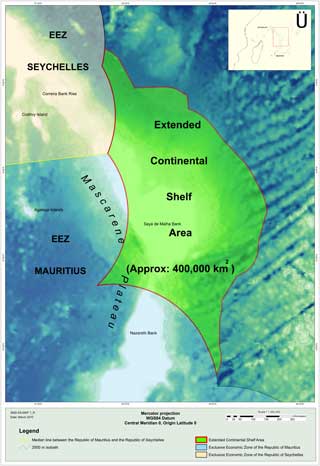 automatically and this is the basis of the EEZ. But some coastal States can claim an extended Continental Shelf beyond the 200 miles if the shelf meets the criteria laid under Article 76 of UNCLOS. Article 76 is entitled “Definition of the Continental Shelf” and it lays down criteria for defining the Shelf and its extensions. Countries have 10 years following ratification of UNCLOS to make a claim for extension.

The Joint Submission was thereafter examined in detail by a Sub commission. Following several interactions and discussions the case went through the final defense stage earlier this year and the recommendations were adopted by the plenary on 30th March 2011.
Recommendations made by the United Nations Commission on the Limits of the Continental Shelf are final and binding on all States party to the Convention and this gives Seychelles and Mauritius sovereign rights to jointly manage and exploit the seabed and subsoil of the Joint Area (approximately the size of Germany) in accordance with a framework agreement that is currently under final stages of discussions by the two countries. A Joint Management Committee has been established for this purpose.

These rights are exclusive in the sense that if Seychelles and Mauritius jointly do not explore the extended Continental Shelf or exploit its natural resources, no one may undertake these activities without the express consent of the two States. The natural resources consist of the mineral and other non-living resources of the seabed and subsoil together with bottom-living organisms such as clams, sponges and crabs. The States also have control over marine research on and below  the shelf.