Saturday, 03 December 2022
HomeKnowledge centreNews and StoriesA race against time and tide to save turtle eggs on Cousin Island

Not all heroes wear capes. Our staff on Cousin Island decked out only in t-shirts and shorts, and often barefooted, certainly fit this adage. They keep to a grueling schedule, ushering visitors onto the reserve for the island's widely acclaimed ecotourism program in the morning, and working on varied conservation activities in the afternoon.

But it is during the hectic turtle nesting season that their heroism comes to the fore. Early hours and late nights are the norm, and so are lengthy patrols along the beaches whether in sunshine or in rain. Not only must they collect data for the Reserve's long-term turtle monitoring program, which started in the 70s, but they also act as emergency rescuers when they encounter turtles in distress.

Take last Monday night for example. Our readers will remember that we wrote about a rare Green turtle nesting on the island last month. She returned as anticipated. But this time her nesting ended in a rescue effort. Chris Tagg, our conservation officer explains.

"Green Turtles can nest every two weeks and lay 2-6 times in a season. We therefore organized night patrols in preparation for her return. On several occasions, we found tracks from abandoned attempts, but we didn't see her. This was the case on Monday. However, on Tuesday morning we discovered she had emerged after the final patrol and nested." 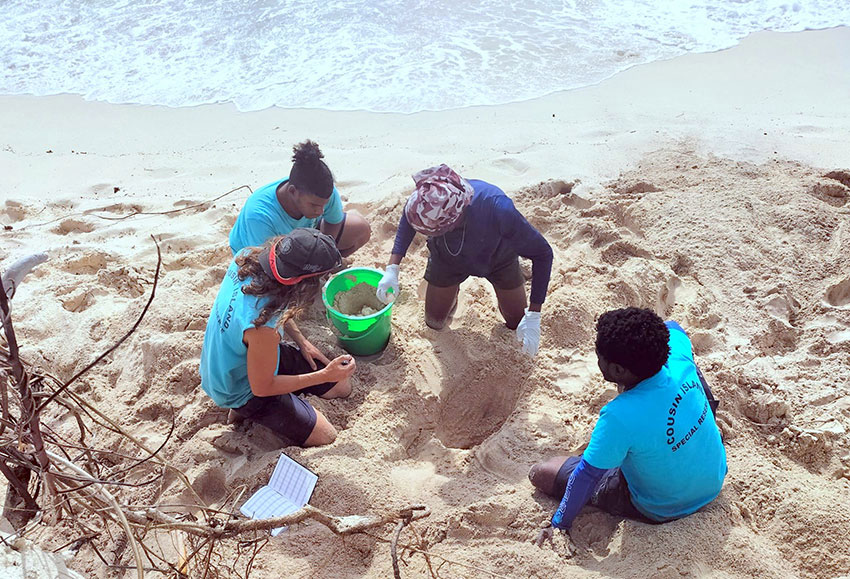 "Unfortunately, her nest was in a perilous spot and needed immediate attention. She had laid her eggs below the high tide line. High levels of erosion have created steep banks that turtles find difficult to climb on some of the beaches."

"In order to save the eggs, we opted to carry out an emergency evacuation and relocation. We were racing against the waves and incoming tide, which was creeping closer as the team started digging in search of the eggs. The bank and layout made locating them a challenge. After a driven effort, Topher Rose, one of the wardens, struck gold and found the eggs! He then led the staff in moving them to a safer location."

I was really excited to find the eggs and really proud to lead the translocation. Hopefully most of them will have the chance to hatch now and I'm confidant I will be able to share this knowledge with others in the future. - Topher

Eroding beaches pose a serious threat to turtles. As sea levels rise, it will be more common to see turtles emerge and nest, only to have their nests flooded and eggs washed away before they can hatch. Recent strong winds and storms have also knocked down several trees and the team has had to clear them as fallen trees impede the progress of turtles across the beach, and their exposed root systems will trap turtles. 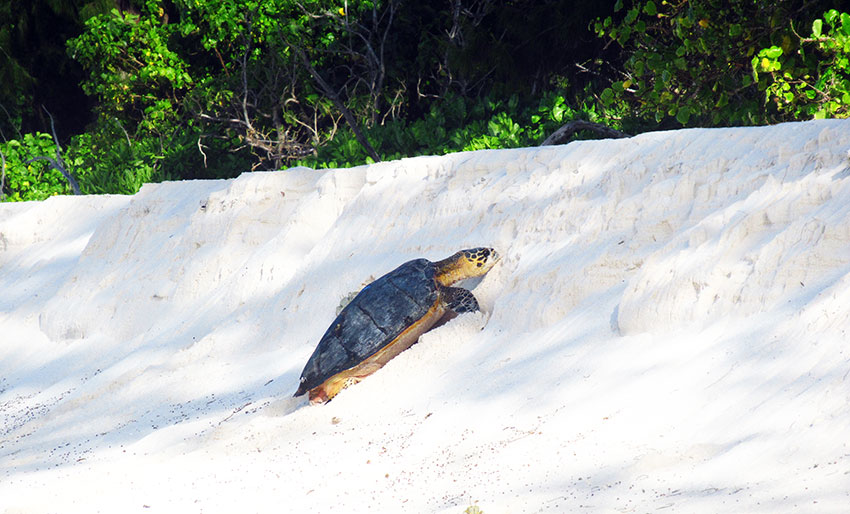 Other threats wrought by climate change include hotter sands, which affect the sex ratio of turtle hatchlings, resulting in a higher proportion of females to males. This has already happened on the beaches of Florida. Coastal development, pollution, poaching, being caught in fishing gear, and vessel strikes are also threats to turtles.

Turtle populations have been declining for years. Though conservation efforts have begun to address this in the last few decades, there is still a long way to go, and the conservation teams trying to protect turtles continue to face challenges.

So this season, spare a thought for all turtle teams working to save turtles. Lend them a helping hand by giving safe passage to these annual visitors to our shores. Keep nesting beaches safe and free of pollution. Don't disturb nests. And watch out for hatchlings.