The Spanish town of Cáceres got a small taste of Seychelles biodiversity during the famous World of Music, Arts and Dance (WOMAD) festival, held from 8-11 May 2014, when artists from the UK led children in workshops and a procession in fish, bird and turtle costumes through its cobbled streets. The inspiration for the costumes was the conservation work being undertaken on Cousin Island Special Reserve. Ian Simons, a designer, maker and art activist from Otherworld Arts, UK said that the island reserve had greatly inspired him to create a themed procession called "Save the Planet" for this year's WOMAD Cáceres festival.

The brain child of musician Peter Gabriel and others, WOMAD is an internationally acclaimed festival now in its 23rd year. It brings together musicians, artists, and dancers from around the world for festivals, events and workshops. 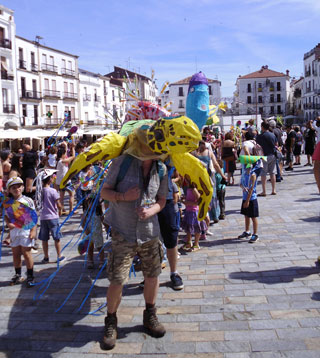 A diverse spectrum of musical genres from practically everywhere in the world, as well as performances and art, is showcased to large crowds of festival goers. This year, 100,000 people attended the Cáceres festival over the four days.

Sunday the 11th of May was all about children. WOMAD used the day to show off children's art creations with the children "marching around the city carrying, wearing, bashing, waving their incredible work."

For their Cousin-inspired creations, Otherworld Arts used collections of reusable materials to make fish and bird costumes with 100 children in 2 days of workshops, which included a big turtle that led the procession. They also gave a talk about Cousin and handed out information sheets on the island. Otherworld Arts have been delivering children’s workshops at WOMAD festivals both in the UK and abroad for the last 20 years.

Dubbed "Art with a heart for the environment" the workshops create an atmosphere of fun and excitement, where children, and the wider community, regardless of age and ability, can learn through arts and crafts about a host of environmental issues.

"We were very pleased to learn that our little island had been picked by the artists as inspiration for their themed costumes," says April Burt, Cousin Island Special Reserve Conservation Officer.

"It shows that the successful work we are doing for biodiversity here in the Seychelles is being recognised," she adds.