Ambassador Robert Jackson,  the US  Principal Deputy Assistant  Secretary of  State for Africa Affairs, visited the award winning Cousin Island Special Reserve and the USAID-funded Reef Rescuers project on Praslin on Friday 4th April. Ambassador Jackson,  who is based in Washington and is the second most senior official responsible for Africa in the US Department  of State, was on a two day visit to Seychelles as part  of a two week tour of Africa. Mr. Jackson was extremely pleased with his trip to the  high biodiversity areas of  Cousin Island Special  Reserve and described the tour as memorable.

Dr. Nirmal Jivan Shah who accompanied Mr. Jackson and another US official, Political Officer Ahmed Maroof, said that “ Nature Seychelles was honoured that the Ambassador had decided to spend half a day with us especially on such 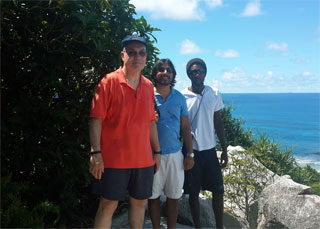 a short trip”. Mr. Jackson was guided around the Special Reserve  by Marcus Dubel one of Cousin’s young Seychellois Wardens.

Mr. Jackson was also briefed about the status of the Reef Rescuers project  at the Nature Seychelles' Island Conservation Centre on Praslin. This climate adaptation coral restoration  project being undertaken in the Cousin island Special Reserve is largely funded by USAID with other  funding  coming from UNDP/Government of Seychelles GEF funds. Dr. Sarah Frias-Torres the Scientific Coordinator of the project gave an interactive presentation on the ground-breaking work. The Ambassador was impressed by the successes of this important project.

Shah said it’s vital that  donors actually see where their money is going and that it results in successes that change situations for  the better.