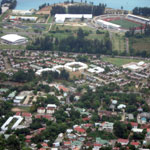 Contributed by Paul Chow: Seychelles is comprised of only 3 islands, out of 115, that have permanent population. These three islands are situated within a range of 30 kilometers of each other, despite our economic zone stretching over a million square kilometers of the Indian Ocean. The largest island is roughly 20 kilometers by 7 kilometers. Urbanization, therefore, has a completely different meaning for our tiny capital city, Victoria, than Nairobi for example, famous for two large townships or slums comprising of millions of formerly rural peasants, all living a miserable existence in search of a better standard of living around the city.

According to the census of 2010, the Seychelles population was 90,945 (a growth rate of 1.3%) but that included 7,798 foreigners (8.6% of the total population), a good percentage of them working in one industry (tuna processing) which is located in Victoria itself for whom accommodation have to be found.

With 57% of the population living outside the greater Victoria catchment, it is not surprising that people movement into and out of Victoria, which is also our commercial capital, cause serious traffic problems. The census found that 25% of the population of Mahé lives between Cascade and Takamaka – that is along the east coast/south road artery; 15% between Baie Lazare and Port Glaud (the west coast road artery); and 18% live in the North West coast conurbation stretching from Beau Vallon to Bel Ombre and Glacis to Anse Etoile.

Unlike the more developed and larger economies, the housing market in Seychelles is still rudimentary. Most people would prefer to build and move into new accommodation rather than buying and moving into an existing accommodation, unless it is rental accommodation. The Census discovered that nearly 71% of households own their dwellings; 10.5% rent from the government; whereas 8.5% rent from the private sector. The most curiously interesting statistics is the percentage of households in rent-free accommodation. This is nearly 10% of the total number of households. Under these conditions population migration is virtually zero or static.

The new settlement of Ile Perseverance, although not a classic “urban  sprawl”,  stretches greater Victoria northwards (as the chart in the census report clearly shows, see attached PDF) but not for the reasons normally applied to voluntary migration in other countries. Ile Perseverance as a social entity did not exist nor grow out of economic self interest of its inhabitants which characterize an urban sprawl. Its population does not reflect economic migration as common in other countries where urbanization or urban sprawls have been observed. It is made up of government-built housing on land reclaimed from the sea by the government. The same can be noted of the older Roche Caiman district, which pulls Victoria southwards.

Seychelles is today considered one of the most urbanized countries in Africa. Indeed, a larger part of the urbanization has been created by the government. Decentralization and curbing urban sprawl must be one of the highest priorities for socio-economic planning  in Seychelles.