The Friends of the Flycatcher after school club based on La Digue has installed eight bird baths on the island for the benefit of the Seychelles Paradise Flycatcher (Veuve). The baths were set up at the Veuve Reserve, the La Digue School, the Flycatcher Lodge, Villa Veuve, and the Community Centre at La Passe.

Bird baths are man-made shallow pools from which birds can drink, bathe, preen or cool off. They are normally made in the form of a basin. 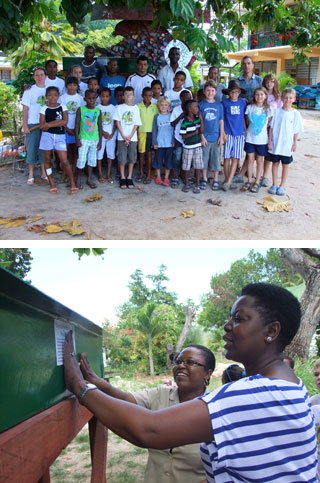 A source of water is as important to birds as is food. Apart from drinking, water also removes dust, loose feathers, parasites and other debris from a bird’s plumage.

The Seychelles Paradise Flycatcher favours native Badamier and Takamaka dominated broad-leaved plateau woodland in proximity to wetland areas for its habitat, with territory density increasing higher up on the island. The wetlands and marshes are also important as breeding grounds for insects, which the birds eat.

"But in the dry season the marshes dry up. We have observed flycatchers going into people’s gardens looking for water and sometimes they come down low to the ground to buckets of water to drink and wash. This places them in danger of drinking detergent and being caught by cats while on the ground," says Josiana Rose of the Seychelles National Parks Authority (SNPA), and the education officer at the Veuve Reserve.

"Provision of water baths for the flycatcher will give them safe and easy access to water for drinking and bathing during the dry season that persists for many months," she says.

Nature Seychelles and the SNPA and have been  promoting the conservation of the Critically Endangered  flycatcher through an advocacy and education project whose aim is to help protect the species in its stronghold on La Digue. The project is part of BirdLife International (Nature Seychelles is BirdLife partner) Preventing Extinctions Programme and is supported by Viking's Optical of the United Kingdom. It's under this partnership that the Friends of the Flycatcher was started at the school.

Although still in its infancy, the club has been involved in a number of activities including cleaning up the island on World Clean-up Day and planting trees in the Veuve Reserve.

"Awareness of the significance of a species needs is a necessary prerequisite to supporting conservation action. By adding these water features we are teaching the children to care for the bird and its habitat," says Martin Varley, Nature Seychelles' Community Coordinator.

The baths are made of fibre glass and stand up to four feet above the ground on a wooden base.

"We are right next to the Reserve and the birds come here to the Badamier and the Bread-fruit trees, so the birds will have somewhere to drink and preen," said Mr. Michel Madeleine the head teacher of the La Digue School after a bath had been installed at his school. The school is the custodian of the flycatcher club and to its credit it now has one of the most active clubs in La Digue.

At the Paradise Flycatcher Lodge, which takes its name after the bird, an excited Mrs. Lucy Ericksson, a tourist from Sweden, was honoured to be part of the installation. Mrs. Ericksson who is originally from Tanzania was visiting Seychelles on the occasion of her 30th anniversary and was staying at the lodge when the club arrived for the activity.  A primary school teacher back in Sweden she happily video-taped the activity for her students.  "I am very lucky to be part of this," she said.