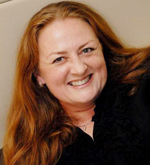 My friend Amy Bowers died on Sunday 20th May at the Seychelles Hospital after a long and brave battle with cancer. Active in the local arts scene for many years, Amy also had a deep interest in the natural environment.She was a long time member of Nature Seychelles and became the organisation’s first Treasurer. She was re-elected on the Board three times and assisted us in maintaining sound financial records that impressed donors, partners and local officials. She was still occupying this post when she died.

Amy was also involved in redesigning Nature Seychelles as the organisation completed its strategic plans ahead of schedule several times. Her wacky sense of humour always stopped us from getting too boring

Amy came to Seychelles from UK in 1990 to join her parents. Her father Tom Bowers, the famous sculptor had come on holiday to Seychelles in 1981, fallen in love  with the place and moved here  in 1986.

The moment she arrived in Seychelles she started to pester me with all kinds of questions about nature, especially what she observed form her home at Anse a La Mouche. Once she spied a creature that I couldn’t, for the life of me, identify from her description because it sounded so bizarre. Another time she called up and said she had seen a leaf move like a fish near the shore at Anse a La Mouche. This, I could happily tell her was undoubtedly a batfish, the juvenile of which takes on the appearance of a dead leaf for camouflage.

Amy’s professional background was in beauty therapy and make-up having graduated from The Park School of Beauty Therapy in London. She worked for several years in the theatrical, TV and modelling world as a point of contact as well as a make-up artist. She also worked in the fashion industry managing design fashion shops in London.

In Seychelles she quickly became a well known face on the local art scene, assisting her father but also working with other artists to promote their art. . She was passionate about getting Seychellois art better known and arranged exhibitions in hotels and elsewhere. She also advised companies, hotels and individuals on suitable artwork for their premises.

In the last few years Amy took up a new career again, this time in the diplomatic arena.  She worked as the British Vice Consul and became an indispensable figure in British and EU affairs in Seychelles. In particular she was active in the recent anti-piracy work.

Amie leaves behind her father Tom, mother Ellen and sister Katy, as well as many friends and colleagues. She will be missed.