59 Seychelles Warblers (Acrocephalus sechellensis) have been transferred from Cousin Island Special Reserve to Fregate Island Private thanks to a Nature Seychelles-led initiative. The transfer was carried out to start a new breeding population on Fregate Island, making it the fifth island in Seychelles to hold this charming little bird.

“It will pave the way for this bird, once said to be “one of the rarest birds in the world,” 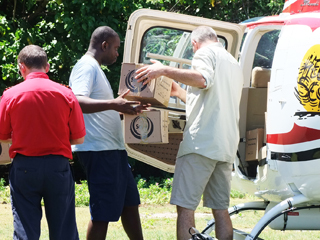 to eventually come off Birdlife International’s Endangered Birds of the World list. We have been trying  to get this project off the ground for a very long time and we have to thank Fregate Island Private for agreeing to partner with us and take the Warblers,” says Nirmal Shah, CEO of Nature Seychelles.

"It is another step in our efforts to fully restore this island and to support the conservation of the unique and indigenous species of this country," said Ian Barbour, Fregate Island General Manager.

The project is funded by a Disney Conservation Fund project to Nature Seychelles through the Royal Society for the Protection of Birds (BirdLife in UK), the Seychelles Warbler Research Group and Fregate Island Private. The translocation proposal was developed and submitted by Nature Seychelles to the Department of Environment. “They readily agreed to it because of the potential ground breaking results for conservation worldwide," says Shah.

The operation involved a team from Nature Seychelles, the Seychelles Warbler Research Group, and Fregate Island. Birds were captured in the morning, transferred by Helicopter Seychelles and were released on Fregate by afternoon of the same day.

"This way the birds are kept in captivity for the minimum amount of time and they have time to eat and drink on Fregate before night time," says Dr. David Richardson of the University of East Anglia.

Prior to the transfer there had been preparations on both islands. Fregate was surveyed for its suitability to carry the Warblers. "The island has been restored over many years, is rat free, and is free of Mynah birds which compete with and harm native birds," says Richardson.

The population on Cousin was also surveyed to identify territories from which to catch birds. Cousin has the original population, and therefore the most diversity. This population has also been monitored for over two decades by the Research group.

Nesting on Fregate is expected within a week or two. The Warbler group will be monitoring this population for the next few years.

"Seychelles is an example of how science and conservation can go hand in hand, and this is a brilliant opportunity to continue studying the Warbler's evolution and behaviour," says Richardson.

The Warbler has come a long way from the days it neared extinction in the 1960s. Then, a world population of  26 was found only on Cousin. An international campaign, which resulted in the purchase of Cousin by Birdlife International, and conservation action saw a complete turn-around for this bird. From Cousin, BirdLife International and Nature Seychelles started new populations, in line with the Species Action Plan, on Cousine, Aride, and Denis Islands in order to secure its long-term survival.

"If the population takes off on Fregate as we expect, it will be the first bird species in the world once classified as Critically Endangered to be removed from Birdlife International’s threatened  birds of the world list because of conservation action," says Shah.