Sunday, 29 January 2023
HomeKnowledge centreNews and StoriesA day in the life of a reef rescuer 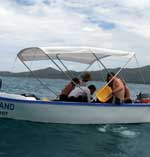 Bobbing on their dingy on a rough sea is where I found the "reef rescuers" working on a Wednesday morning. They were just off Cousin Island Special Reserve, almost hidden from sight by tour boats bringing visitors to the island. The North West monsoon has made the sea choppy but they are very calm. How do they do it? I wondered to myself.

Corals in the Seychelles and the region were destroyed by bleaching caused by warming oceans. The most severe bleaching occurred in 1998 but they have been other subsequent bleaching events that have caused more damage.

Nature Seychelles is using the “reef gardening” method, to restore reefs on two sites around Praslin and Cousin Island Special Reserve. Using this method, healthy corals are collected from donor sites, raised in underwater nurseries to required size and then 'planted' in degraded sites.

Earlier when I met David, who is the project's manager, he had told me they were headed to a coral collection site off Cousin. Here they would dive in shallow water, about 6-8 metres, to collect about 2000 fragments of corals, the target for the day. They had identified the site through dive surveys they carried out beforehand, which also helped them identify coral species they can use. They gathered preferably naturally-broken fragments that have low chance of survival. When harvesting from a healthy colony not more than 10% is taken, so that it can heal and regenerate.

Back on the dingy, our reef rescuers, David, Gideon, Rodney (from Nature Seychelles) and Katie, Hannah and Nick (international volunteers from the UK) are breaking up the coral fragments into tiny pieces of about 1cm, which they tell me are called "nubbins." They then tie the nubbins onto a rope.

It seems to me that sturdy sea legs and nimble fingers are needed for the job. But they say that anyone can fix nubbins to rope. They do however have an interest in the marine environment in common and are expert divers. "I have not specifically worked on reef restoration so this is going to be a very good experience for me," Nick, a marine biologist who previously worked on sharks in South Africa, says.

One of the project's objectives is to transfer skills and to build expertise to scale up restoration on other sites in Seychelles. One of the local partnerships that has been established is with Octopus Dive Centre. Its manager, Florent, is part of this team but is not on the boat when I visit.

When the rope is full of nubbins, one diver will go down and fit it onto a nursery frame that has already been prepared near Cousin Island. "It's very easy," David says, "the big part of the job was actually to build the nursery."

Two types of nurseries, the rope and the net nurseries, are being employed for the project. The rope nursery is being tested for now and the first nursery was filled with about 5,000 fragments in early November and lowered into the sea.
The nubbins will be left in the nursery to grow with a bit of maintenance and monitoring. "We need to clean regularly, check for algae, and adjust the depth of the nursery if there's bleaching," David says.

I asked Katie to sum up her day. "Long hours on a boat and with a bit of heavy lifting. But it's all good," she said.