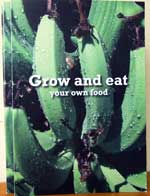 A book that promotes sustainable living in Seychelles through growing and consuming food locally was launched by Nature Seychelles last week. The roving Ambassador for Women's and Children's Affairs Mrs. Marie Pierre Lloyd launched the book called Grow and Eat Your Own Food. The launch focused on the twin themes of agriculture and gender as drivers for sustainability. It is the crux of the book, Nature Seychelles' Chief Executive Nirmal Shah said.
The book promotes a concept called 'edible landscaping', which Nature Seychelles has used at its Heritage Garden. The garden was started to combine agriculture, conservation, folklore, tradition, and culture. It involved tapping into local knowledge about various valuable and traditionally grown plants, which were then used for landscaping. This concept is being promoted for replication across homes, in back yards, on reclaimed land and around buildings.

Shah said the garden has shown that one can grow whatever they want on reclaimed land. Nature Seychelles headquarters, the Centre for Environment and Education, is on reclaimed land. It also proved that people can landscape with useful native plants instead of decorative plants that could become invasive, and it encourages people to return to their past methods of food production.

"We are living in a modern society, where these things are being forgotten. We hope this book will help people situate our roots in a modern situation." Shah said.

The launch drew upon this year's theme for Commonwealth Day - marked on March 14th, ‘Women as Agents of Change’ and also celebrated the International Women's Day centenary.

Ambassador Lloyd said this initiative reinforces the message of the Commonwealth Secretary General Mr. Kamalesh Sharma during the launch of the theme: "women and girls hold the key to sustained development and improving the lives of 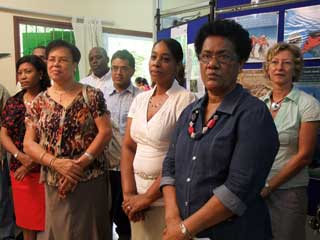 others. To change a woman's life for the better is to unlock the potential to change and lift a whole society."

Mrs. Lloyd said that women in Seychelles make important household decisions, and if sustainable living is to succeed, advocates must go down to households and families and schools and teach people through initiatives such as this. The benefits are many, she said, among them good health, fresh food, import substitution and food security.

Shah praised staff and volunteers of the organization whose efforts have culminated in the book. One woman in particular, Lucina Denis, the horticulturalist who maintains the Heritage Garden, and who took the opportunity to show it to guests after the launch, was singled out for praise.

Complimentary copies of the book were distributed to guests who included the Principal Secretary for Social Development Linda William, the Roche Caiman Member of the National Assembly, Joevana Charles, and District Administrator, Wilbert Ombath, and representatives of government departments and civil society. The book is available in local bookshops.
< Prev Next >