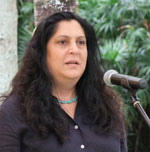 Nature Seychelles has signed a grant agreement with the Small Grants Programme - SGP (funded by the Global Environment Facility and implemented by the United Nations Development Programme) to look at the effects of climate change on Hawksbill Turtles. The agreement was signed on Thursday 5 August 2010 at the scenic Botanical Gardens in Mahe, on the occasion of the launch of the SGP in the Seychelles

SGP started in 2009 in Seychelles and focuses on empowering communities to tackle conservation issues at the local level.

"I extend congratulations to the first Seychellois Grantees here with us today in joining the global SGP Family," said the UNDP's Resident Representative Leyla Tegmo-Reddy on launching the programme and signing agreements. "I look 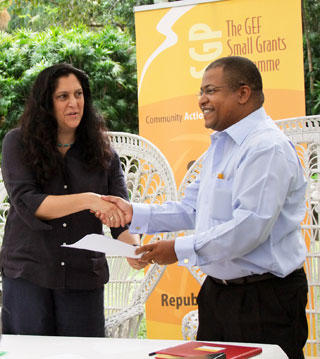 forward to visiting your projects under implementation in my future missions to your beautiful country." Mr. Bernard Solomon, Nature Seychelles administration and operations manager signed on behalf of the organization.

"The SGP supports initiatives which are community-based, are innovative, and gender sensitive, and also lead to reduced threats to the local and global environment," says Veronique Bonnelame, the SGP National Coordinator.

"We aim to enhance conservation of this critically endangered species through this research on reproduction while increasing local and global awareness of these effects. We also aim to put into action measures to maintain suitable nesting habitats for the turtles." Says Nirmal Shah, Nature Seychelles CEO

A pilot was began in 2009 in partnership with the Marine Turtle Observatory, Kelonia, of  Reunion. During nesting season, instruments called data loggers were added to 30 nests to collect information on nest temperature. Nests were closely monitored around the time of hatching.  The loggers were  removed and their data used in estimating an approximate sex ratio of the hatchlings. The project builds upon this effort and the long term turtle management program on Cousin which has increased the population of this long-lived species.

Launched in 1992, with 101 countries currently participating, the SGP aims to deliver global environmental benefits in the areas of biodiversity conservation, climate change mitigation, protection of international waters, prevention of land degradation, and elimination of persistent organic pollutants through community-based approaches.