The turtle nested in front of the houses

So when one nests, it causes a stir among passionate conservationists who work here, many of whom have never them before. Everyone heads to the beach to witness this massive reptile nesting in pitch darkness.

It was no different last week, when Dailus Laurence, the Reserve's chief warden, saw a night-time visitor preparing a nesting site close to his house at 8 pm.
"For the past few weeks, I have kept a watchful eye on the beach in front of my house hoping a green turtle would nest because I had seen them pop up for air in the water nearby. On this day, my night vigil was rewarded," he says. 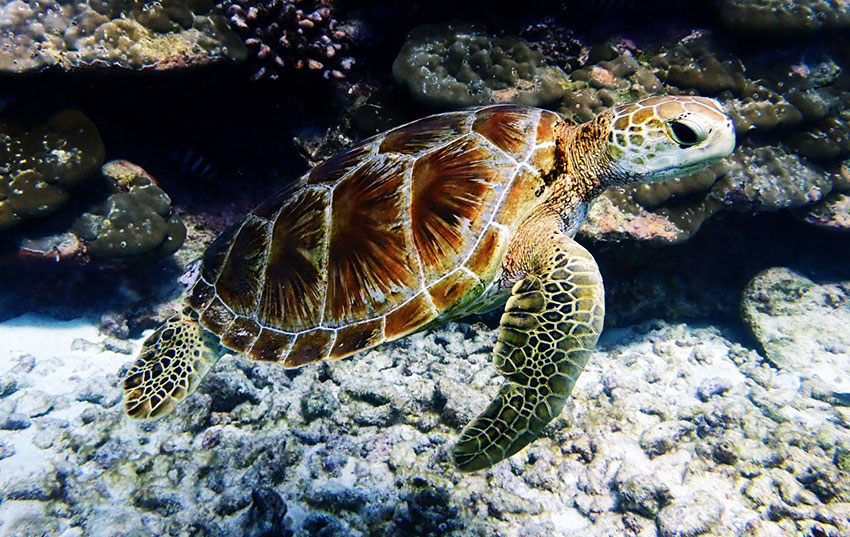 Juvenile green turtle. Although they nest sporadically on Cousin, green turtles are often seen in the water

Soon after, island staff, Seychelles Maritime Academy (SMA) students on Work-based attachment, and researchers gathered on the beach to watch her lay. At 11.15 am, she finally deposited her clutch of eggs into their temporary sandy abode, where they are expected to hatch after two months.

"The phrase 'fertile as a turtle' came to mind," jokes Senmon, a Seychelles Warbler Group researcher who witnessed the nesting. "It was a special encounter with an ocean miracle: she has survived plastic pollution, fishing nets, climate change, and more," his counterpart Kiran adds more seriously. SMA students Rebecca and Elita stated that it was an awe-inspiring experience being present while the turtle was laying. "It was my first time seeing a turtle that big," Rebecca said.
As is practice, the team collected data for the long-term conservation program on the island. Cousin is the most significant rookery in the western Indian Ocean for Hawksbill turtles (Eretmochelys imbricata, Kare) and the staff is trained in turtle monitoring.

The Green turtle exhibits strong nesting site fidelity, returning to the rookeries where it was born to breed. In the inner granitic islands, including Cousin, however, Green turtles have all but disappeared due to historical exploitation, particularly for meat. Worldwide, of the seven species of marine turtles, the Green turtle was the most exploited for human consumption. 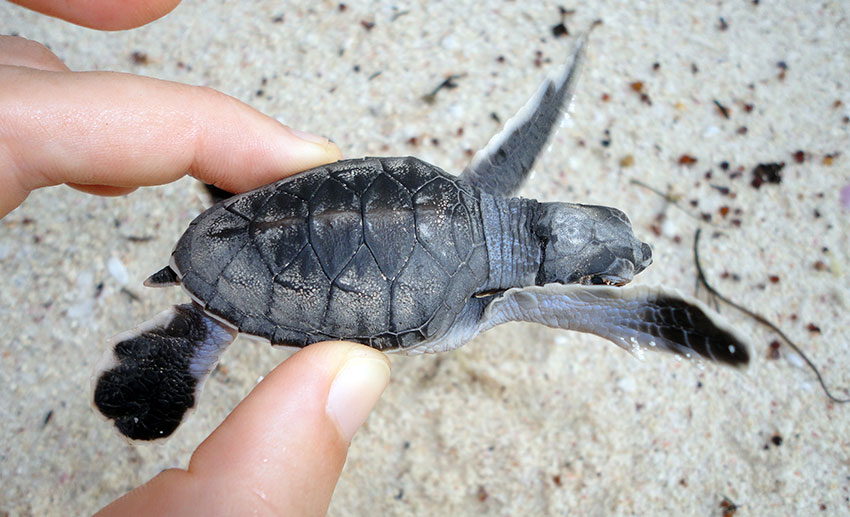 "Once all the nesting turtles from an area have been removed, that area is lost to the species memory," says Chris Tagg, the conservation officer on Cousin Island. "This makes every nest a blessing since hatchlings emerging from this beach now associate it with their birth and are hopefully able to return to it when they reach maturity in 25-30 years."

Green turtles can be found in almost all tropical and sub-tropical oceans. They are listed as "Endangered" on the IUCN Red List and are protected from exploitation in most countries where they are found. The Wild Animals and Birds Protection Act protects turtles in Seychelles. Illegal poaching, habitat loss, marine debris, global warming, vessel strikes, and fishing gear entanglement still pose a threat to its survival.

Our hope is that these periodic sightings will become more frequent and the Torti-d-Mer will return to Cousin Island. We have proven that the protection of nesting beaches works with the Hawksbill turtle, whose population multiplied by eight-fold. But this can only be seen in decades to come," Dr. Nirmal Shah, Nature Seychelles' Chief Executive concludes.