Thursday, 11 August 2022
HomeKnowledge centreNews and StoriesA Plurality of Predators - The Raiders of the Nests on Cousin Island Special Reserve

Nature is the grandest stage in the universe. Our conservation officer on Cousin Island Special Reserve, Chris Tagg, can testify to this. He sees nature in high definition every day. Last week, he saw something amazing. 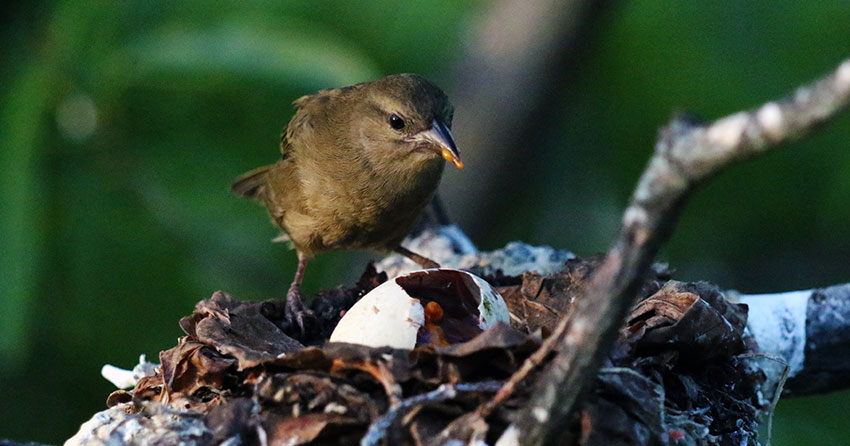 It started with the Seychelles fody raiding an unguarded nest

"I was monitoring Seychelles magpies, as I do twice a week," Chris says. "It is noddy breeding season on the island. We have some 30,000 odd pairs of Lesser noddys (Kelek in Creole) nesting on the island. They provide us with a non-stop symphony of begging chicks and calling parents. Their nests made from Pisonia leaves, twigs, and bird poo occupy every tree and space. I noticed what appeared to be nest predation. Two Seychelles fodys (Tok Tok) were raiding an unguarded Lesser noddy nest for its egg. In a flash, two Seychelles magpie robins (Pi Santez) joined the party but knocked the egg to the ground. On the floor, it attracted skinks. The larger Wright skinks (Teng teng) immediately pounced on this meal, leaving the smaller Seychelles skinks (Lezar mangouya) with scraps. It was quite mind-blowing and happened so fast."

Opportunistic egg predation is common, but this was the first time Chris had seen the four actors in action at one egg nest.

Both fodys and skinks predate on seabird eggs. Fodys typically eat insects, fruit, seeds, and when in season, seabird eggs. They also help themselves to unattended food left in houses. Wright skinks flourish on islands with seabird colonies because fallen eggs and chicks form part of their diet, as do dropped fish and squid, other skinks, insects, food, and fruit scraps. An efficient climber, the Seychelles skink is largely insectivorous. Skinks are important ecologically as they will eat everything. While we might feel sorry for the noddy pair that lost their egg, it's all part of nature, Chris asserts, adding that it is unlikely that the Noddy parents will make another nesting attempt this late in the season. 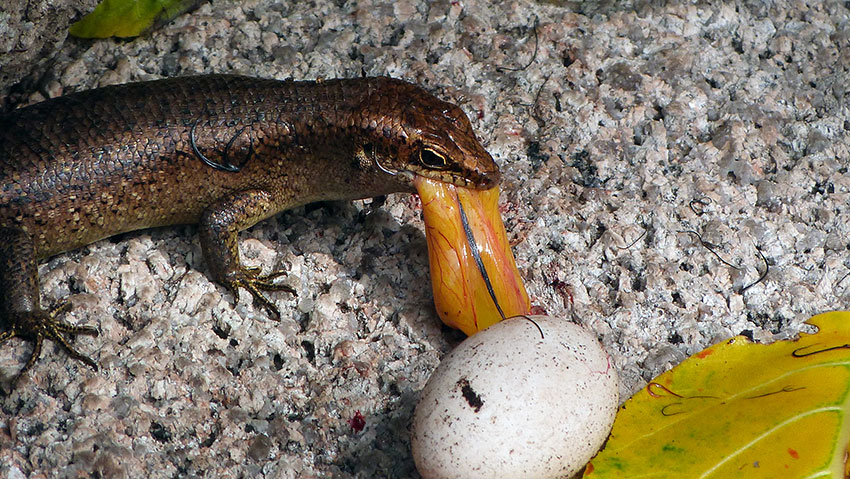 The moment offers a snapshot of the breeding success of the seabirds whose nesting season corresponds to the South East Monsoon in Seychelles. "This nesting season has not been very good at all on Cousin. As most people will have noticed, this year there has been heavy rainfall and strong winds. This caused a lot of damage to the nests. The egg predation occurred in an area where every single nest was lost six weeks ago. Most of the noddys had already made their second attempt. Our breeding monitoring data will, however, give us a true picture of the success."

Meanwhile, the poor noddy parents must have returned to find their nest empty, but Chris was not there to see it. He had moved on to be told off by Brown noddys on the cliffs for getting too close to their nests, and to be entertained by Wedge-tailed shearwaters wails bouncing off their cavities in the hill. Nature is always performing. We just have to watch.