It's been 10 years since Nature Seychelles made a splash in the local waters with the launch of its ground-breaking and game-changing Reef Rescuers project. Based on Praslin Island and working in the Cousin Island Special Reserve, the project sought to restore coral reefs damaged by climate-change induced coral bleaching. 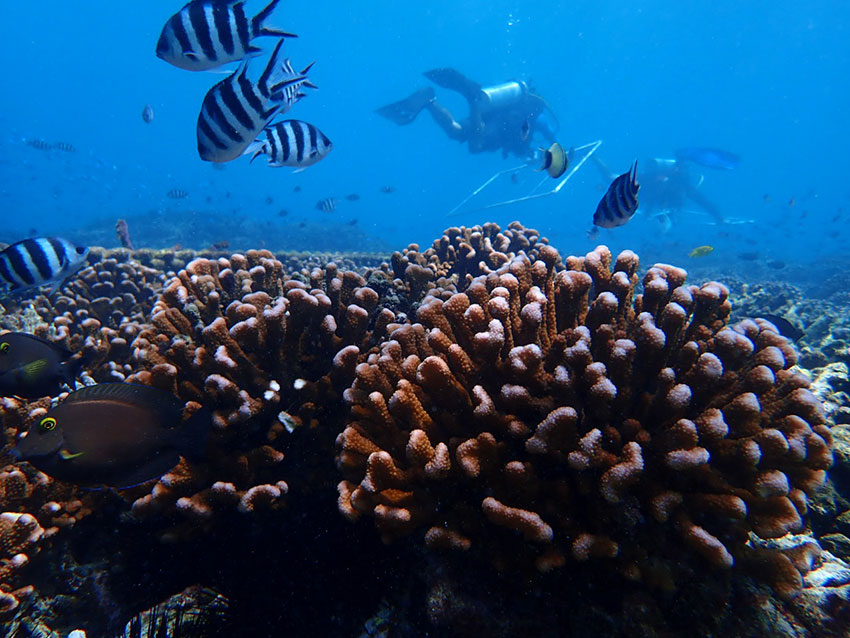 The herculean task was met with some skepticism and naysaying in some quarters. But a decade down the line, we have proved that, yes, we can restore corals. And we can do so at a large scale.

The Reef Rescuers project began on October 26, 2010 at a gathering attended by among others the then US Ambassador to Seychelles, Mary Jo Wills. Her government, through the US Agency for International Development (USAID), had extended a grant worth over 500,000 USD for the project for 3 years. This marked the return of the funding agency to the country since the 80s. So exemplary were the milestones achieved by the project, USAID supported the project for a remarkable 9 years in total.

Nature Seychelles broke the mould with the project. The Reef Rescuers accomplished the phenomenal task of raising over 50,000 coral nubbins in underwater nurseries and transplanting these in 5000m2 of degraded reef. The project attracted and trained over 60 scientists from the region and around the globe. A well-received toolkit was published to cascade methodologies and experiences collected. The Centre for Ocean Restoration Awareness and Learning (CORAL) was launched to act as a national and regional hub for knowledge sharing. Additional funds for the project were sourced from the Global Environment Facility (GEF) and European Union through the Indian Ocean Commission. In total Nature Seychelles raised a whopping USD 1 million for reef restoration in Seychelles. Other coral restoration projects were carried out with Constance Lemuria on Praslin and Six Senses Zil Pasyon on Felicite Island. 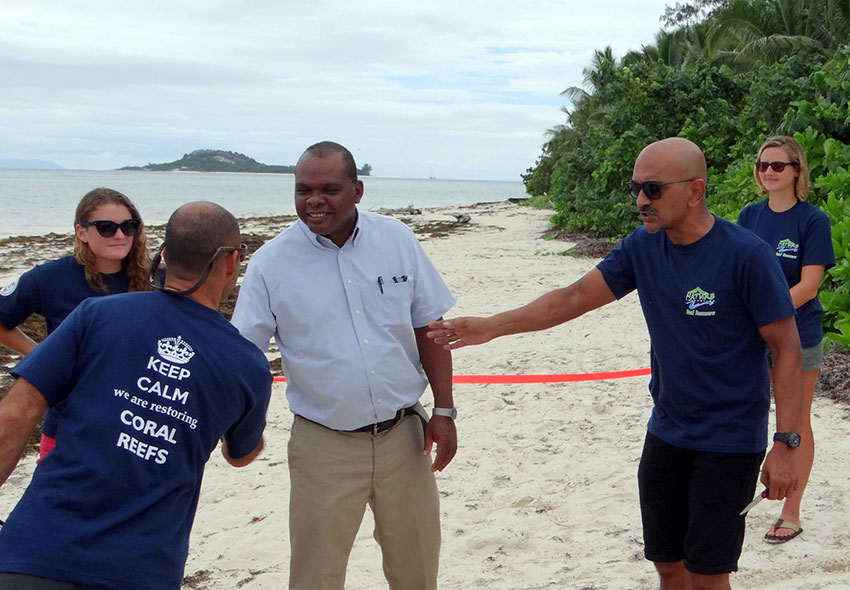 The large scale restoration was unprecedented.

"There was no reference point. We took experimental sized technology developed by scientists from Israel and trialled it in the field," says Dr. Nirmal Shah, Nature Seychelles Chief Executive.

The method picked for restoration is called reef gardening: corals are collected from healthy donor sites, raised and tended in underwater nurseries for a year, and transplanted at pre-selected sites.

"Along with other technical aspects of the project including coral species and genotypes to be targeted, the method was validated by a group of regional and international coral reef experts at a technical workshop held at the project's inception," says Kerstin Henri, the NGOs projects director who has led the project for the last decade.

A decade of discoveries

The project has acted as an active and dynamic underwater laboratory where research questions on coral reproduction and growth, animal behaviour and reef resilience could be addressed. A number of discoveries were made by the team of scientists working on the project - from innovations to carry out repetitive tasks to scientific breakthroughs, which were published in peer-reviewed scientific journals.

"The most important scientific breakthrough we had was the discovery of 'super corals' which survived several bleaching events," says Shah.

Unfortunately, with recurring and frequent coral bleaching events, these have also suffered.

"Coordinating the Reef Rescuers program through one of the biggest global bleaching events (2016-2017) has made me realize how even the most pristine reefs on the planet are not safe from the devastating impacts of climate change. But it has also given me hope for these ecosystems, as we were able to find and propagate survivors, reflecting how resilient these organisms can be to environmental changes," says former team member Louise Laing 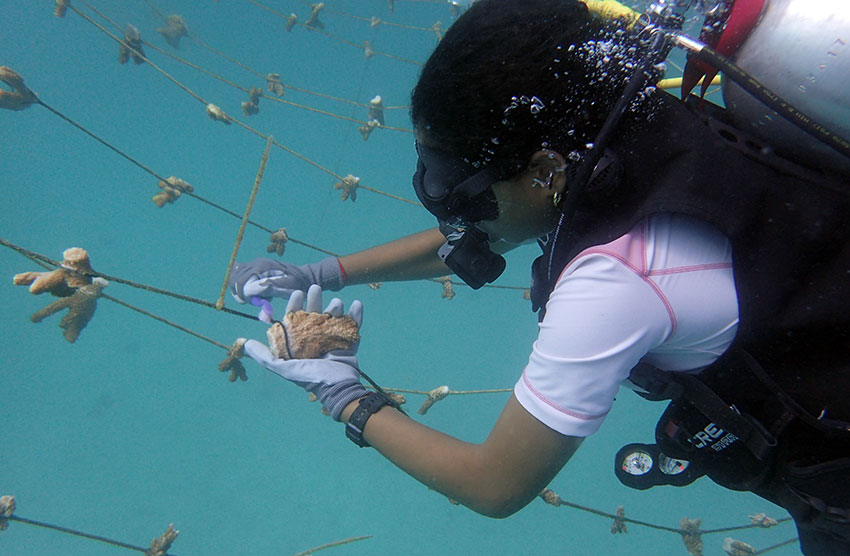 Athina Antoine of the Reef Rescuers tends to coral in a nursery (Photo: Camila Marino)

In an exciting turn of events, Nature Seychelles recently received a 10-year anniversary gift in the form of a new grant from the Adaptation Fund through UNDP and the Government of Seychelles. As part of a large regional project with Mauritius, the NGO is set to leap-frog into the third and next level of its coral reef restoration program. This new project will look at novel techniques from overseas in coral genetics and reproduction.

"Climate change keeps on happening so now we have got to move to another level of assisted evolution where we look at training corals to survive heat and look at genetics signatures among other things," says Shah.

"What the Reef Rescuers has achieved in terms of large-scale ecosystem restoration - using low-cost methods - is simply outstanding. With this new funding, I believe we in Seychelles have the potential to become leaders of reef restoration worldwide. At Nature Seychelles we have an appetite for pushing boundaries. Watch this space for the big reveal!" he ends.