Individuals and corporations have helped Nature Seychelles reach its goal to replace the diesel powered generator used in Cousin Island with a Photovoltaic Solar Power system. In a partnership between Nature Seychelles and Climatecaring.org, the organizations in April launched a crowd funding drive. 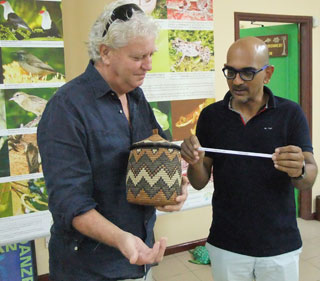 Through an online campaign using the crowd funding firm Indiegogo, people were asked to support the project by donating money. Individuals could donate £1 for each of the twelve hours the sun is out in the Seychelles Islands. This would total to a contribution of £12 each. For this contribution, each individual contributor received a Seychelles postcard and then entered into a prize draw.

The lucky winner of the draw was Niamh Ryan from Ireland. She has won a free four week conservation expedition to Curieuse Island worth £1,495 kindly donated by Global Vision International (GVI). The draw was held at the Nature Seychelles offices on Friday 6th of June. Each entrant's name with their unique assigned Indiegogo number were placed in an ornate basket and after a good shake by Tim Kirkpatrick of Climatecaring.org, one name was picked out of the basket by Dr Nirmal Shah, CEO of Nature Seychelles.

"Many congratulations to Niamh, we look forward to meeting you here in the Seychelles very soon," Tim Kirkpatrick said in a statement after the draw. "To the not so lucky, we offer our commiserations and sincere thanks for entering and donating to our campaign."

Niamh will work with GVI, a renowned international volunteering organization that has been working in Seychelles for many years. She will receive £100 from Nature Seychelles towards paying for her airfare after which she will be helped to set up an indiegogo campaign for the balance.

Niamh and the many individuals who helped raise the funds to switch to solar energy use on Cousin Island played a vital role in lowering carbon (CO2) emissions on the island and therefore keeping climate change in check. CO2 emissions are believed by scientists to be the chief cause in climate change. The switch to a solar powered generator will reduce the carbon emissions on Cousin Island by around 8.000kg annually. Reducing carbon emissions at Cousin means that the island can begin to return to as near a pristine ecosystem as possible, realizing the dream of Dr Nirmal Shah. 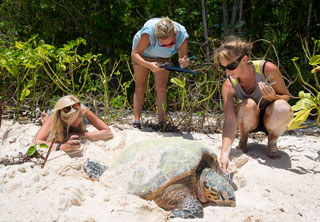 "I believe we have raised awareness on climate change among individuals as well as corporations," Tim Kirkpatrick said after the draw. Switching to solar powered energy will also translate to a saving of an estimated £600 every month in the operations of Cousins Island management. These funds can then be channelled to other project areas including research, paying for extra staff, maintenance, boat and machine repairs and much more.

Although the campaign is drawing to a close, several organizations are still working on sending in their contributions.“The campaign has surpassed our expectations," says Dr Nirmal Shah. "Funds are still coming in because it also served as an awareness campaign which has motivated even traditional donors to offer assistance.”