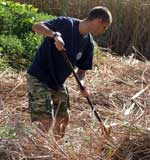 Naval officers from HMS Monmouth, a British Royal Naval ship, on Friday helped Nature Seychelles in maintenance work at the reserve, the Sanctuary at Roche Caiman. Managed by Nature Seychelles since 2002, this 2.9 ha wetland is home to  a varied list of plants and animals. Nature Seychelles has undertaken extensive restoration on the site, which resulted from reclamation work in the 80s, in order to enhance the pre-existing habitats and to create additional habitats. As result the reserve is a popular outdoor learning and relaxation area.

The officers cleared out the main drainage ditch leading from the reserve that prevents flooding. Next, they collected and deposited the earth from the ditch into bags, carried them the entire length of the reserve and heaved them over a 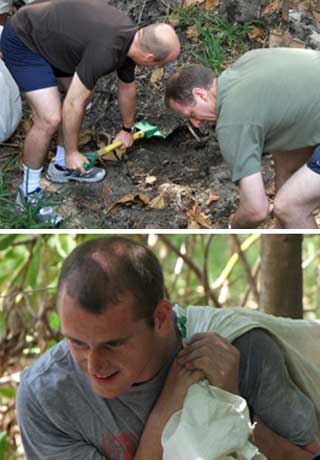 fence to waiting colleagues. These were then used to raise the bottom of a ditch, to allow pools at the wetland to maintain depth for longer during the dry seasons as water will not drain out quickly. This is important for the fish and other aquatic life, as well as migrant and resident birds such Heron’s and Bitterns that use the site.

As these improvements were going on, two of the officers were elsewhere working equally as hard. They were collecting and bagging compost and taking it to the Heritage Garden for later use. In addition to this, another officer was collecting previously cut Bulrush and heaping it up for composting. He persevered on his own until all the other work was finished around the site, at which point the other officers came to his aid.

"Despite the heat, I know that all of the volunteers from HMS Monmouth thoroughly enjoyed our morning at the nature reserve. It was good to know that we could help preserve this fascinating habitat," Lieutenant Chris Eastebrook said.

"It was fantastic to have the crew from Monmouth here," said Robin Hanson who manages the reserve. "They did essential work, which will have several really positive and lasting effects. I am very happy with all the hard work they did in a very short amount of time. The fact that they gave up their free time to be here is very inspiring."

HMS Monmouth is a Type 23 Frigate with 185 crew, and was commissioned in 1993. She is based in Devonport (Plymouth) and her Commanding Officer is Commander D A Bassett who assumed responsibility for HMS Monmouth in November 2010.