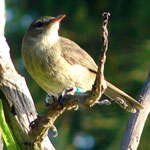 Why does female infidelity occur so frequently throughout the animal kingdom? A 10-year study from the University of East Anglia shows that Seychelles warblers may increase their offspring’s survival through their infidelity.

Why does female infidelity occur so frequently throughout the animal kingdom? A 10-year study from the University of East Anglia shows that Seychelles warblers may increase their offspring’s survival through their infidelity.

Although in many animals females may pair up with a specific ‘Social’ mate who helps raise the pairs’ offspring, DNA fingerprinting studies across a wide range of animals reveals that offspring may often be sired by males other than the pair male.

What has perplexed scientist is why females engage in such infidelity – what is the benefit of being fertilised by these other males – males which do not contribute towards raising the offspring.

Despite pairing with the same male for life, female Seychelles warbler birds often prefer to be fertilised by other males, and this appears to increase the genetic quality of their offspring.

The study has shown that these extra-pair fertilisations can result in a higher diversity of specific genes which detect disease and trigger an immune response in offspring. As a consequence, the offspring survive longer probably as a result of having greater resistance to a wider range of diseases..

The research ‘MHC-dependent survival in a wild population: evidence for hidden genetic benefits gained through extra-pair fertilisations’ has been lead by Dr David Richardson (UEA) and is published today in Molecular Ecology

Since 1997 more than 97 per cent of warblers on the tiny island of Cousin in the Seychelles were ringed, blood sampled, and their breeding attempts followed. The researchers monitored the fate of 160 birds hatched on the island between 1997 and 1999, over 10 years.

They found that females paired to males with a low diversity of disease-detecting genes (major histocompatibility complex or MHC) elevate the gene diversity of their offspring by gaining extra-pair fertilisations from males with higher diversity. This extra pair fertility was found to be common – accounting for 40 per cent of offspring.

Importantly, the offspring born as a result of this female infidelity have higher genetic diversity at these disease-detecting genes than they would have had if sired by the cuckolded pair male.

However they were not found to be higher than the population average.

The researchers then found a positive association between diversity of MHC genes and juvenile survival. A higher than median MHC diversity was found to increase lifespan more than two-fold.

They also found that offspring with a specific rare gene variant (Ase-ua4) had a five times longer life-expectancy than offspring without this allele. However these birds did not necessarily have a greater MHC diversity. It is thought that individuals with this rare variant of MHC genes may survive longer because these rare variants better resist diseases that have already evolved to evade more common variants.

“We did not find any evidence for genetic benefits of extra-pair fertilisations per se, as on average extra-and within-pair offspring survived equally well.

“However, by not being faithful to a pair male with low MHC diversity, females are ensuring that their offspring do not end up with below average levels of MHC diversity and therefore lower survival.

“We have shown that the association between survival and MHC diversity levelled off with increasing diversity, so choosing males with above average MHC diversity would not have resulted in any additional fitness benefits for the offspring.

“One thing that remains unknown however, is what mechanism drives the patterns of MHC-dependent extra-pair mate choice. Experiments are needed to determine whether females actively choose more diverse MHC males or whether other factors like male-male competition or sperm competition play a role.”