The effective conservation of biodiversity, essential for human survival on our planet,  was recognised by the world’s politicians in 1992. They put in place the first legally binding global treaty for biodiversity conservation, the Convention on Biological Diversity. Ten years 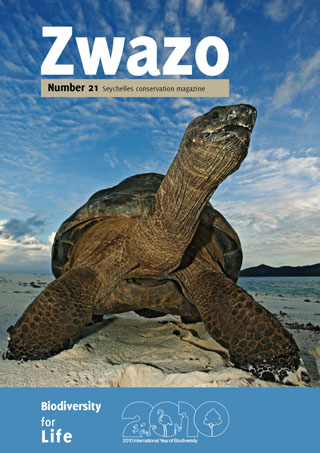 later, over 190 Parties to that convention made commitments to substantially reduce the rate of biodiversity loss by 2010. "So here we are in 2010, the UN International Year of Biodiversity, and how are we doing?" Dr. Mike Rands, guest editor asks.

The answer is not encouraging. Recent scientific analysis of global indicators conducted by
BirdLife International, UNEP-WCMC and others, shows that biodiversity loss has continued unabated, despite an increasingly large number of conservation actions being taken.

BirdLife (Nature Seychelles is BirdLife in Seychelles) an official partner of IYB says urgent action is needed. IUCN - the World Conservation Union's Director General, Julia Marton-Lefèvre  says of this urgency: "There is no ‘in 10 years time’, or ‘in 20 years time’. We do not have this luxury. We are the species that caused this problem. We are the only species that can fix it. This year is the time to do it."

“If a third of your family were threatened with extinction, or if only one third of your business was productive, or if you were losing trillions of dollars a year, would you be worried? Would you do something about it?” She asks.

Zwazo's feature articles  are written by people who are proposing solutions based on field research and who are experimenting with solutions on site. In a thought provoking article, "Can people be trusted with Biodiversity," IUCN's Regional Director Ali Kaka draws on experiences from eastern and southern Africa to show why there is a return to embracing communities in conservation for the benefit of biodiversity. Chris Feare's "Exploitation and Conservation of Sooty Terns in Seychelles" demonstrates the usefulness of robust data for species management, while Rudy van der Elst of the Western Indian Ocean Marine Science Association discusses a programme that documents the diversity of fisheries and their resources in the region. Saving albatrosses from extinction by working with fishing industries and providing innovative and win-win solutions to seabird bycatch is the way to go, says Ross Wanless. Nirmal Shah remarks that sharks are worth far more to the economy alive than they are on a platter served up with chips. Christopher Kueffer brings us lessons learnt in the management of invasive alien species in Seychelles and Wayne Meyer talks about vegetation management on Cousin Island.