14 members of the Africa Council of The Nature Conservancy (TNC) braved soaking wet conditions to visit Cousin Island Special Reserve on the 1st of February 2018. Rain and cloud cover, typical of this time of the year, persisted throughout the morning of the visit. The conditions did not, however, dampen the spirits of both visitors and Nature Seychelles' staff on hand to receive them. Neither did it scuttle the unique island tour that Cousin is known for. 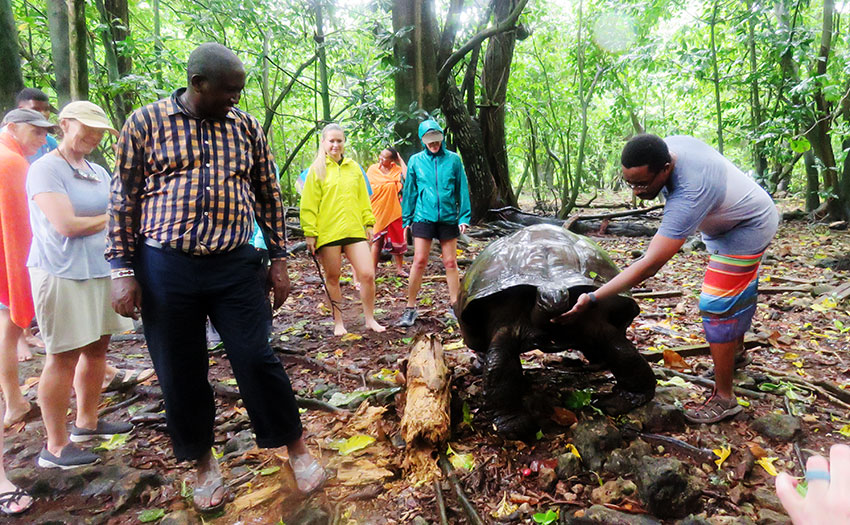 A former coconut plantation, Cousin was acquired for conservation in 1968 to save the Seychelles warbler, which numbered less than thirty birds and were, at the time, restricted to the island. To aid their recovery, coconut trees were cut down, and native forest allowed to regenerate. 50 years later, the native forest has been restored. The warbler population grew exponentially and translocated populations now occur in 4 other Seychelles islands. In 2015 it was downlisted to "Near Threatened" on the Red List.

Many of the birds could not be seen due to the rain, save for a few White-tailed tropicbirds and pairs of White terns. The charismatic Seychelles magpie robin did make an appearance when Christopher whistled, giving him the opportunity to talk about the intensive management program carried out for its conservation. It too came close to extinction in the late twentieth century, but was saved through a recovery program that also resulted in its down-listing from "Critically Endangered" to "Endangered" on the Red List.

Other attractions of the day included the Seychelles blue pigeon, the endemic Bronze-eyed gecko and the abundant skinks. The visitors were also charmed by the island's Aldabra giant tortoises who enjoyed a scratch under their necks expect for "grumpy", aptly named for his perpetual bad mood. 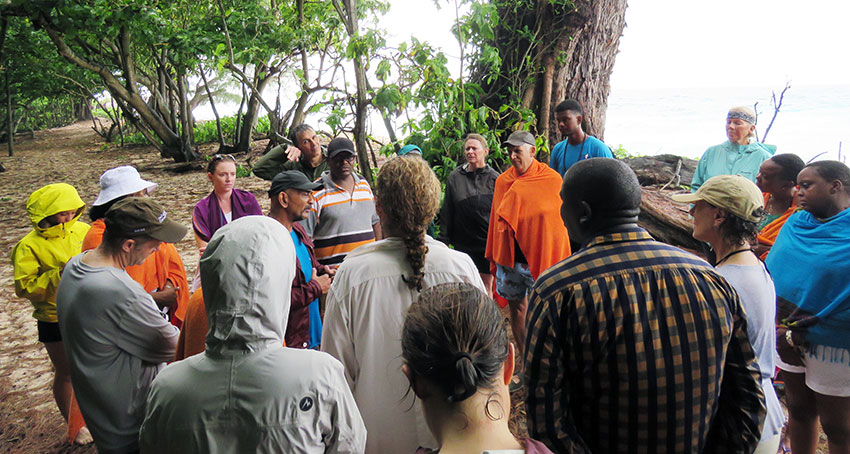 As part of the tour, Dr. Shah outlined the conservation programs on the island, which included Coral Reef Restoration in the marine protected area of the reserve, the Conservation Boot Camp, and Cousin Island's carbon neutrality project.

He explained that corals in Seychelles were bleached by ocean warming events, the major one occurring in 1998. Bleaching led to widespread coral reef degradation and coral mortality.

In 2010, with funding from USAID, Nature Seychelles began its Reef Rescuers project to assist slow recovering coral reefs. Using the coral gardening method, 40,000 coral nubbins were raised in mid-water nurseries. 24,000 were successfully transplanted to degraded reef on an area the size of a football field (5,225 m2) in what was the world's first large-scale coral reef restoration project.

Unfortunately, another warming event in 2016 caused coral mortality in the transplanted area. The project is now removing the dead corals and transplanting afresh, large healthy colonies that have survived the 2016 bleaching event.

Over 40 scientists were trained by the project, which proved that large scale transplantation is possible. A toolkit on the methodology used has been published. Nature Seychelles is now looking to the future, where it hopes to establish land based nurseries and use new technologies to mass produce corals for transplanting.

The tour ended at the island's Field Centre, which houses the Conservation Boot Camp. The visitors learned about the innovative program that is bridging the academia to career gap by equipping young people with conservation skills picked up in the field.

Then it was off to brave rough seas for a boat ride that took them off the island.