The Aldbara group including waters around Assumption island will be designated as protected areas by February 2019, under a process called the Seychelles Marine Spatial Plan (MSP) Initiative. Another area to also be protected is the Amirantes groups. The Aldabra Group and is being nominated for ‘Marine National Park’ and is described by the Marine Spatial Plan as a High Biodiversity Protection. (Source SNA). This area is now the target of bitter protests.

Following the recent signing of the agreement between the Seychelles and Indian governments to construct a naval base on Assumption Island, there have been protests and a public outcry citing the proximity of Assumption Island to the Aldabra Atoll, with concerns that this would have a negative impact on the biodiversity of the islands and restrict if not completely cut off access for Seychellois.

Dr Nirmal Shah, fresh out of hectic and difficult negotiations spanning the weekend and the whole of last week on behalf of the government on the subject of tuna allocations and the future of the Indian Ocean Tuna Commission, has come out to explain his position.

“I have in in the last week or so received numerous communications from individuals and civil society members both locally as well as from overseas requesting comment on the naval base that is allegedly to be constructed on Assumption Island,” he said. “The issue that many have with Assumption is, to me, simply a symptom of a larger problem I have been trying to get people to pay attention to for many years. This is the conservation of and access to islands that are not part of the inner granitic islands. Unfortunately, I have been either ignored or attempts have been made to shut me up.”

“Regarding the supposed construction of a military base on Assumption and the impact this would have, I don’t have enough data and information to form any opinion on the nature of the environmental impact, if any. There’s a lot of sound and fury out there but the organisations that should be deeply concerned are keeping mum,” he said. “The Ministry of Environment, Energy and Climate Change is the legal watchdog for environmental protection in the country as well as the custodian and driver of the Marine Spatial Plan – I don’t understand why it has still not made a detailed statement including whether an Environmental and Social Impact Assessment should be undertaken.” 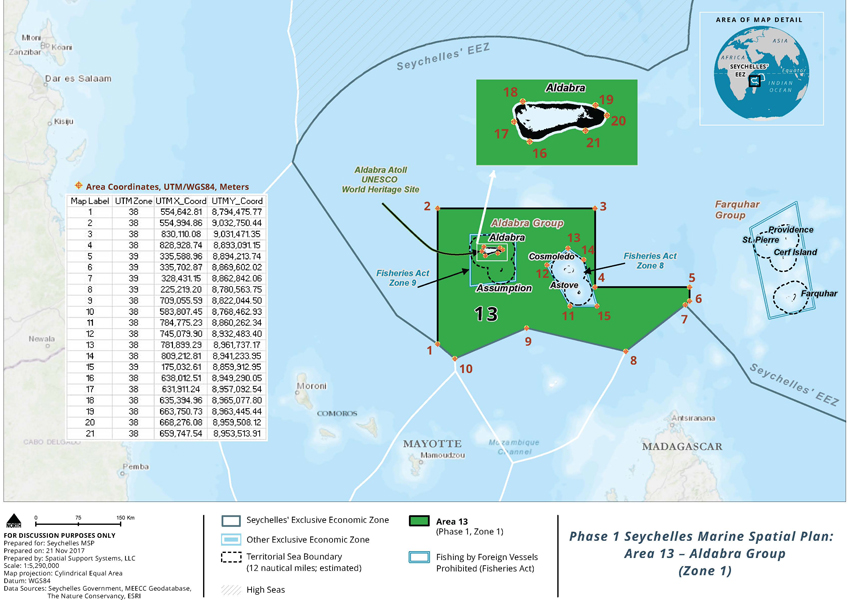 Map of proposed designation of the Aldabra group (source: seymsp.com)

“We would need to hear from The Island Development Corporation (IDC) who manage Assumption and the Island Conservation Society (ICS) to whom the conservation of Assumption and other outer islands has been delegated. It is also absolutely imperative to know what the Seychelles Island Foundation (SIF) - the legal management authority for Aldabra – has to say about potential impacts, if any, and mitigating measures it would put in place if necessary for Aldabra,” Shah explained.

“Other organisations that fund these projects or handle donor funding need to be queried. The UNDP has a substantive presence in Seychelles, executing donor-funded grants mostly for the environment. Millions have been given to outer islands, Aldabra and to other related projects. What does UNDP have to say? I presume that, as a UN organisation, part of the UNDP’s mission is to promote and facilitate transparency, good governance and participatory processes,” he added.

Dr Shah points to the MSP and the government’s wish to designate the waters around the Aldabra group which includes Assumption as a marine national park and says, “I believe the MSP had listed the presence of a listening or radar post on Assumption, but the committee responsible for the MSP must get more details on any so-called military base, otherwise the credibility of the MSP is at stake.”

It is to be remembered that Dr. Shah is the only Seychellois environmentalist not to have taken part in the process of the MSP. His sudden walkout of the second national workshop was headlined on the front page of Today in Seychelles and covered in other newspapers and magazines as well as on social media. At the time he had said he was concerned that the MSP process, including conservation of islands, was not transparent and fully participatory. His concerns seem to have been justified.

“The organisation I work for -Nature Seychelles - has been the pioneer in island restoration. In this regard it has had huge success in working with private island owners such as those of Denis, Cousine, Fregate, Bird and Darros islands, but we have not been able to do work with the outer islands. I feel we must democratise the activity of conservation of our islands. While the protected areas and threatened species need to be protected and access managed, it makes sense, especially in a country suffering from serious human capacity constraints, that the government would want it to be open to others who have the knowledge and skills to do so, and that the donor funds destined for conservation of these islands are shared transparently and equitably,” he concluded.