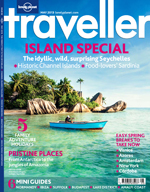 George, one of Cousin Island most famous inhabitants, has a starring role in the May issue of Lonely Planet Traveller magazine, one of the world's most popular and influential travel publications. The giant tortoise and the island he resides on, is part of a 12-page spread on Seychelles, which appears in this issue of the magazine that is promoting island travel.

A picture of the Anse Source d’Argent beach is on the cover along with the title "The idyllic, wild, surprising Seychelles."

Inside the magazine, from pages 52 to 63, the perfect trip to the Seychelles is laid out. The magazine focused on five islands - Mahe, Praslin, La Digue, St Anne Marine park and Cousin Island Special Reserve - highlighting some of the activities and attractions on each island.

George must have blown away the writers, as he often does, because they declared Cousin Island "best for giant tortoises." He graces a full page of the feature.

George and his antics are well-known to Cousin island's residents; his latest act of machismo was breaking the wardens' barbeque grill. His mate Kasban is called the 'bench breaker' and is the reason that all the benches on Cousin Island are 'tortoise proof' - higher than the tallest tortoise.

But they are probably the most loved animals by locals and visitors alike. The magazine also mentions other inhabitants of the of the nature reserve, including nesting seabirds, endemic land birds and nesting hawskbill turtles.

The feature on the Seychelles also provides useful contact information and the cost of activities. Apart from the magazine, Lonely Planet is well known as the largest travel guide book publisher in the world.