Monday, 26 September 2022
HomeKnowledge centreNews and StoriesFlooding, who to blame? Seychelles records highest rainfall with over 843mm of rains

By Sarah J. Jemina - As the storm dissipates and the sunshine emerges, another storm is brewing as more than 300 traumatised families directly affected by the floods that shook the four districts of Eastern Mahé in the past few days, take stock of the damage to their properties and search for answers and someone to shoulder the blame.

According to the Meteorological Services’ Principal Met Officer Vincent Amélie, for the first time in its recent weather history, Seychelles has recorded 843 mm of rainfall for the month of January alone, which he said is more than 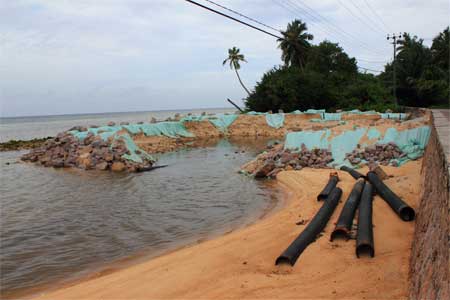 double the average rate of rainfall received. The previous high was recorded in 1991 when around 798 mm of rains were recorded.

“Our normal rate is around 405 mm for January. But by last weekend we had already reached that target and we issued an alert of the impeding storm, indicating the fact that our soil has already reached saturation point. Any millimeter of rainfall above that would have been too much for the soil to handle, hence would result in landslide,” Mr. Amélie told TODAY in Seychelles.

This means that from last Friday to Tuesday around 400 mm of rain fell.

Mr. Amélie said the rains coincided with high tides, making it difficult for the water to flow out into the sea. The types of soil, the topography, the timing of the high-tides and the inefficiency of the drainage systems are all determining factors that account for the flooding and these vary from country to country, he explained.

The coastal plain or ‘plateau’ between Anse Aux Pins and Point Larue has always been prone to flooding and over the past decade there have been several instances of flooding affecting houses in the low-lying area. However, it seems that the impact of the flooding caused by the three days of torrential rain triggered by a tropical depression which turned into a storm named Felleng, took the authorities by surprise.  In an urgent Cabinet meeting held at State House on Monday, President James Michel talked about looking into measures that could help mitigate the impact of floods on properties, but by then the damage had already been done with 100 houses affected by water at Anse Aux Pins, Au Cap and Pointe Larue. It should be noted that the authorities received warning of abnormal rainfall in January, five days before Felleng struck.

Work to mitigate the impact of flooding along the East coast of Mahé was initiated 10 years ago when the Mandarin estate just past Au Cap which was built on former marshland, was submerged in one of the worst floods ever to hit the newly-formed district. That was in January 2002.

President Michel, who was Vice-President at the time, personally visited the victims of that disaster after which he launched a task force, chaired by Minister Joel Morgan to look into the flooding issues at Au Cap. He gave the team members 21 days to come up with recommendations to solve the problems at the time.

The findings of the task force were presented the following month and a series of drainage issues were identified as the main factor responsible for blocking off the excess water and preventing it from flowing out into the sea. The drainage system was said to be too narrow and too small and was clogged up because it was not being regularly maintained. The Land Transport Division then also came up with a series of proposed measures to solve the drainage problems.

Four years later, in January 2006, following more flooding on Mahé, a National Drainage Task Force, was set up and mandated to once again carry out a study to assess the situation in all flood-prone areas in the country. The National Risk and Disaster Management Secretariat (NRDMS), created in October 2004 at the recommendation of UNEP (United Nations Environmental Programme) following a severe storm which hit Praslin in 2002, was upgraded to a department. The DRDM (Disaster Risk Management Department) is now responsible for identifying the risks faced by the population and for setting up a national management plan and strategy to respond to any disaster. The organisation has, with the support of United Nation agencies, coordinated several workshops and even carried out mock emergency response exercises.

It is ironic that a full decade later, as the country takes stock after another crisis involving floods and heavy rains, the same issues are resurfacing. The need to widen the existing drains, desilt and deepen river beds in flood-prone areas, ensure more regular and consistent maintenance of drainage systems and water passages, as well as better inspections by the Town and Country Planning Authority of construction sites are once again on the table.

The most recent and boldest attempt to reduce the risk of inundation at Au Cap, the construction of a storm water channel in the sea at the mouth of the Au Cap River had just started when the tropical depression hit the country last week and the flooding started. Perhaps due to poor design or simply because it was not yet completed, the storm channel was among the first pieces of infrastructure to be washed away on Sunday. Whatever the reason for its destruction, the project which was being funded by the Japan International Cooperation Agency (Jica) to the cost of SCR1.2 million was wrongly timed as the rainy season of these islands situated at 4° South of the Equator is still in full swing in December and January every year.