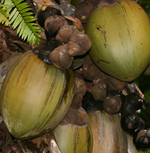 The latest update of “The Red List of Threatened Species of the World” by the World  Conservation Union is bad news for conservation efforts in Seychelles. The Red List contains assessments of all the species in the world thought to be in danger and now we find that the Coco de Mer, our incredible  botanical icon, is more likely to become extinct than previously thought.

Assessments of most of the endemic flowering plants in the granitic Seychelles islands show that of the 79 endemic species found in our islands, 77% are at risk of extinction. Most of these species have been assessed for the first time, but the status of the Coco de Mer has been changed from Vulnerable to Endangered. This is a much higher risk category than what it was in previously.

The Coco de Mer is estimated to presently occupy an area which is less than 100 square kilometers and is restricted to fewer than six locations. There has been an irreversible decline in numbers in the areas normally occupied by the species and it has been estimated that the population has been reduced by more than 30% over three generations. Most of the areas where it once grew have been degraded by fire, both man made and wildfire. As a result, there has been a loss in the quality of its habitat especially on Curieuse island. Human development in areas once occupied by the species is more bad news.

The assessment also says that continuing decline in the population by more than 30% may continue within a maximum of 100 years if the same amount of exploitation continues and invasive diseases and parasites are introduced. The current levels at which the Coco de Mer is being exploited are unsustainable. Illegal harvesting of nuts adds to the problem. It is thought that the amount of nuts harvested has more than doubled in the past 11 years.

The Coco de Mer also has properties that do not lend itself to propagation especially when under threat. It has a slow growth rate, a limited ability to disperse its huge seed and has seeds that are sometimes not viable.

The successful conservation of threatened birds in Seychelles led by Birdlife  International, Nature Seychelles and the Seychelles government with the collaboration of private island owners has proven that we can indeed save species in danger. What  about the Coco de Mer? What can be done?

Originally published in The People as “Can we lose our national tree?”