Nirmal Shah the award-winning CEO of Nature Seychelles, conservation biologist, coastal manager and science popularizer has been bitten by the blogging bug. Starting this June Nirmal is sharing incisive commentary on all things environment based on his experiences in the Seychelles and around the world. Shah has been passionate about using the media to advocate for science and conservation. He has been heard through his columns in newspapers and numerous appearances on the media including ones such as CNN, BBC, Reuters, PBS, NBC-Today Show, SABC, and CCTV.

In 2008, he put the idyllic Seychelles archipelago and entire Small Island Developing States (SIDS) on the world map by 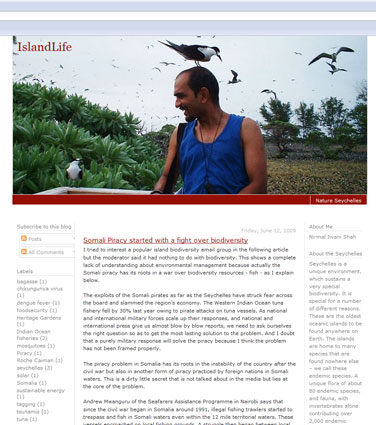 Shah’s work with Nature Seychelles scooped the Not for Profit category with a citation from organizers saying he won the category "for spearheading environmental conservation through the internet within the Seychelles and across the Western Indian Ocean shelf".

Now you can read Shah's offerings, including extracts from his popular column in the People Newspaper of Seychelles, at his blog titled Island Life. Just click on the title and follow the link.

“Scientists and technicians should “morph” into citizen journalists if they want to move beyond discovering and describing problems and become real change agents. Unfortunately in this region we are still struggling with what CP Snow called the Two Cultures – the dichotomy between science and art. And yet environmental management is as much an art as it is a science”.  Shah says. 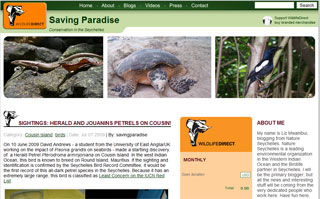