Nature Seychelles observed World Environment Day with its General Assembly on 4th June  rallying members and stakeholders to celebrate the last 3 years of wonderful and exciting results delivered by the  association. On hand to present the results were Nature Seychelles Chief Executive Officer Nirmal Shah, and Director for Strategic Operations, Kerstin Henri.

Antoine Marie Moustache Nature Seychelles' Council Chair - who opened the meeting and welcomed those present - said the organisation's council is extremely pleased with its achievements, which he said would not have been possible without dedicated staff.  Permanent staff now number 20 and include a high percentage of women - more than 60% - ranging from field  based wardens to senior technical executives.

Nature Seychelles has been vigorous in conducting its mandate to improve the conservation of biodiversity through scientific, management, educational and training programmes.

The organisation has led inspiring action saving species on the edge of extinction and restoring entire islands into hotbeds of biodiversity. Its management of Cousin Island Special Reserve has earned international acclaim with Cousin being recognised as a model for island conservation. Using radio, TV, the internet, books, posters, colour magazine, training and curricula  materials, the organisation has educated and rallied many to action both locally and internationally. It has been the focus of local and international media attention and has been featured in many TV and Radio programmes and articles such as on CNN, the Today Show and the New Scientist magazine.

The highlights for the period under review included the translocation of the Seychelles Magpie Robin and Seychelles Paradise Flycatcher to the private island of Denis. The translocation of the Flycatcher resulted in its breeding for the first time outside of its stronghold of La Digue Island. A partnership with Urbino University is looking into the state of the Seychelles Kestrel, which hangs perilously on the balance on Praslin. Cousin Island's 40th anniversary was celebrated bringing together international partners and experts in a symposium that looked at the past and charted the future for this special island.

More conservation success was to come through research findings that established that the number of nesting turtles on Cousin have increased eight fold. And in 2010, Cousin Island became the world's first Carbon Neutral Reserve. The association continues to work with the public, government and private sector through initiatives such as the introduction of environmental management systems for tourism businesses and the stakeholder group for seabirds.

The financial health of the organisation presented on behalf of treasurer Amy Bowers by Kerstin Henri revealed the determination that has gone into mobilising resources for conservation. A number of donors have been approached to provide grants for projects. Among the larger grants received are the United States Agency for International Development (USAID) support for restoration of corals damaged by climate change and the Global Environment Facility(GEF)support for protected areas management.

Nature Seychelles has also invested heavily in infrastructure development at its headquarters in Mahe and on Cousin Island Special Reserve. Funding has come from core resources and from donors and has helped in the construction of staff housing on Cousin, the Nature X centre used for Green Health activities and the road leading to the headquarters. 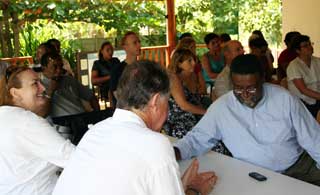 The new direction the organisation is taking is making conservation relevant to people. To this end, new programmes such as Green Health that combines nature and wellbeing  at the urban wetland, the Sanctuary at Roche Caiman have been started. During this period, Nature Seychelles signed an agreement with the Seychelles Agricultural Agency to promote food security through its Heritage Garden initiative. The organisation is developing more community oriented programmes that will include working with the vulnerable in society and widening its constituency base. A new staff position has been created for this purpose.

During elections Antoine Marie Moustache, Mike-King Harman and Amy Bowers were unanimously endorsed to continue as council members. Rudi Perdiwalla was also voted in as new council member. Ms. Perdiwalla, the Executive Director of  the National Council for Children (NCC) a statutory body,  has been involved with children rights in the Seychelles for many years and will be involved in the direction the organisation is taking of working with young people  especially those who are the most vulnerable and at risk.

Members reflected on the change-making nature of this organisation that has been a pathfinder  blazing new trails for other to follow as well. “ Well done”. Exciting”. So many achievements in so little time” are some of the plaudits from members, stakeholders and donors.