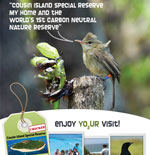 Seychelles President James Alix Michel has congratulated Nature Seychelles on the work it has undertaken, which has resulted in Cousin Island Special Reserve becoming the world's 1st carbon neutral nature reserve. Cousin's new carbon neutral status was launched by Nirmal Shah, Nature Seychelles Chief Executive on 27 September 2010 at the opening of the Tourism Expo 2010 organised by the Seychelles Tourism Board in Victoria, to celebrate tourism and biodiversity during World Tourism Day and week. Mr. Barry Faure, Secretary of State in the office of the President, Mr. Matthew Forbes the British High Commissioner to the Seychelles, Mr. Alain St. Ange, the STB Chief Executive who opened the Expo, Tourism industry players, conservation 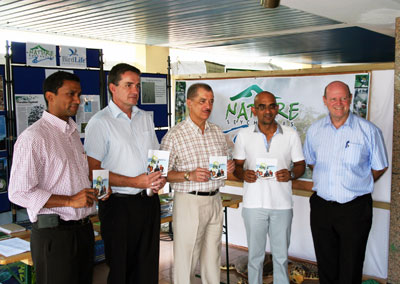 NGOs and other guests were in attendance.

Applauding Cousin's new status Mr. St. Ange said, "As custodians of the tourism industry and the beauty of Seychelles, which is what we have to sell to the world, we are thankful to Nature Seychelles and Cousin for the effort they have put in."

And Mr. Bernard Elizabeth, the Chair of LUNGOS, the national platform for civil society in Seychelles said, "On behalf of the LUNGOS family and myself, I wish to congratulate you for this first in the Seychelles and the world. Nature Seychelles' achievement is a testimony of the capacity of NGOs and civil society in general to embark on high value-added projects and programmes for the benefit of society and humankind."

Cousin Island welcomes thousands of eco-tourists each year. In recognition of the environmental impact of  these visitors, most of whom fly from Europe and reach the island by boat, and after media reports in Europe urging citizens  not to  travel to long haul destinations like  Seychelles, Nature Seychelles  took the decision to make the Reserve carbon neutral.

"As the management organization of Cousin Island Special Reserve, applauded as one of the best long term examples of the successful marriage of tourism and conservation, Nature Seychelles was concerned about the impact of such media campaigns. Our main concern was the possible negative effect on tourism revenues that go towards conserving Cousin and other environmental projects." Nirmal Shah explained.

"Thus in 2009, with the assistance of our UK partner the Royal Society for the Protection of Birds (RSPB), we chose and hired Carbon Clear a leading European carbon management company, to assess the footprint of conservation and tourism activities on Cousin Island Special Reserve. This included both on and off island costs as well as the hotel, transport and other relevant impacts of  our international visitors. We found that we were responsible for more than 1,500 tons of carbon dioxide equivalents annually. The restored forest on Cousin was estimated to absorb a certain amount of this. But the bulk had to be offset. Again using RSPB and Carbon Clear a search was made for a carbon sequestration project that met several internationally agreed criteria. We found one in Sudan and we purchased the appropriate number of carbon credits.  Since there are so many carbon offsetting schemes floating around we wanted to ensure that what we had done was robust, verifiable and legitimate. We hired the assurance firm of Nexia, Smith and  Willamson to audit the process. They gave the project a clean chit."

The British High Commission in Seychelles funded the assessment, while carbon credits were purchased with the ticket revenues from the eco tourists who visit Cousin.