Some species you will find in great abundance on Cousin Island are land crabs. When you walk, you have to be careful not to crush them. But do you know crabs fulfil an important ecological role in the reserve? 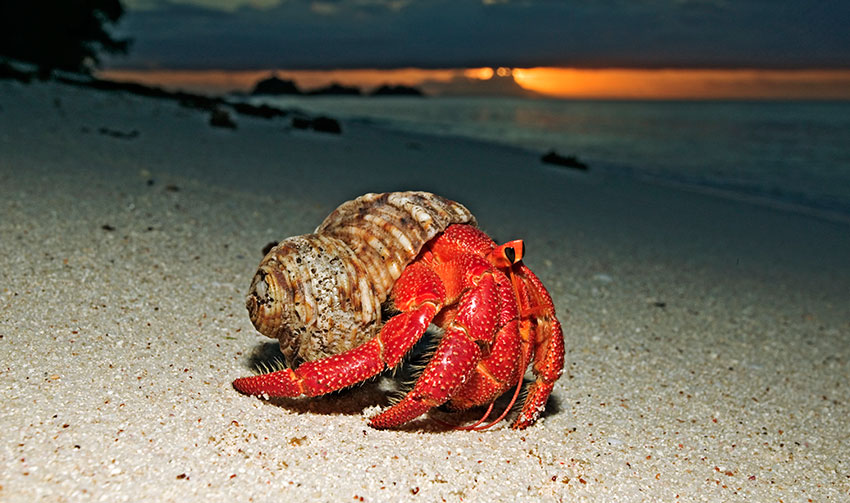 Hermit crabs rely on shells to protect their soft bodies

Cousin Island has nine species of crabs - three species of Ghost crabs and Hermit crabs respectively, and 2 of Nipper crabs. There is also one large true land crab found in the mangroves of the island.

Hermit crabs are common on the plateau all the way to the shore. They liven up the pathways around the island, sluggishly groping and clambering over everything and anything. A highlight of a tour of the island beloved by the wardens involves picking up a Hermit crab and showing it to the visitors. The wardens are adept at this. They grasp the shell while avoiding the sharp claws of the crustacean, and then hold it up for inspection. They explain what types of Hermit crabs can be found and how to differentiate them by colour - purple, red, and tawny - and by size. Hermit crabs live in seashells to protect their soft abdomens, so the wardens will also tell their visitors why they must not pick shells on the beach. 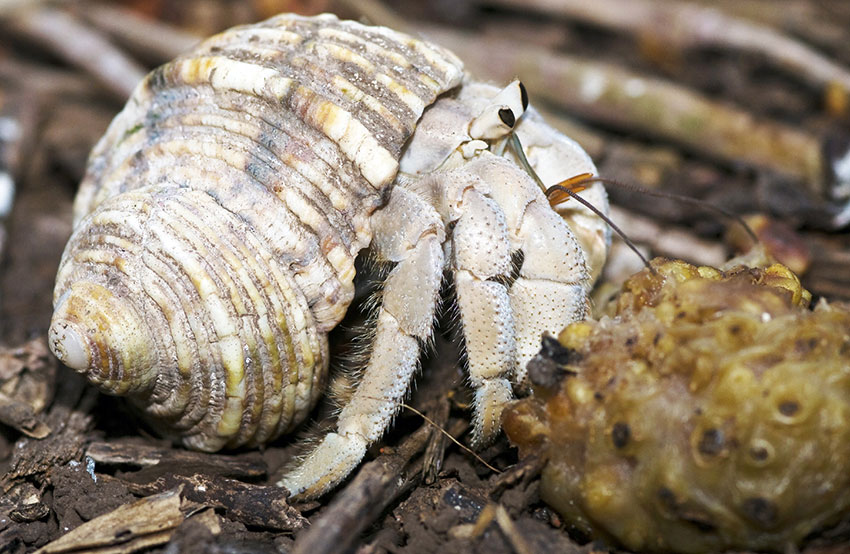 Visitors will also learn about Ghost crabs. They are found on sandy beaches and 150 metres inshore in suitable habitats. On less disturbed islands such as Cousin, they are active during the day. You might see the Horn-eyed, Purple, and Pink ghost crab. As you approach the shore, ghost crabs scurry about, racing in and out of the waves or hunkering down and being battered by the waves. They own all those burrows you see in the sand into which they'll retreat when they feel threatened. Their hurried pace across the sand is quite amusing to watch.

Aside from being an island attraction, land crabs are essential to the ecosystem. As scavengers, they eat anything from fallen fruit to plant material to dead birds and provide an invaluable service to the island. The wardens call them the vacuum cleaners of the island. Hermit crabs even turn up in and around staff houses and clean up any food scraps. The staff always seals their food to keep them out. The Horn-eyed ghost crab also preys on turtle eggs and hatchlings. 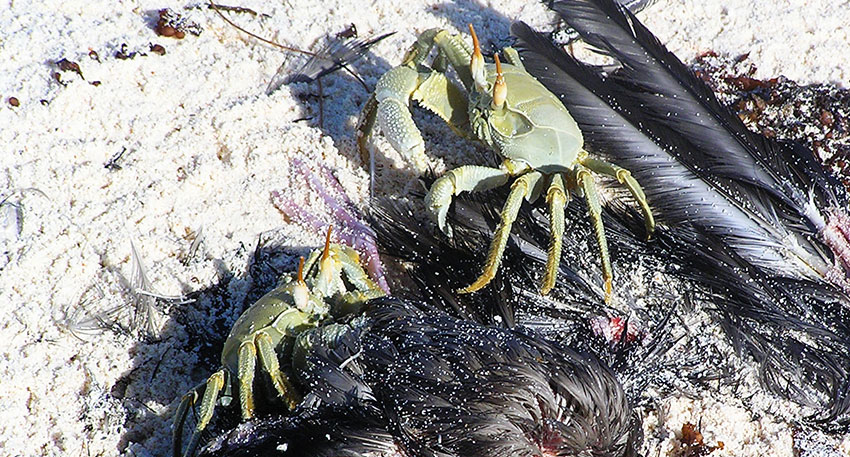 Clean up crew Feeding on a dead bird

As they forage in forest litter, land crabs help oxygenate the soil and recycle nutrients. Their distribution across coastal habitats makes them useful for comparing habitat quality across islands. A survey of land crabs undertaken on several islands in 2009, revealed that the number of crabs differs greatly between islands and habitat types. Additionally, islands like Cousin with a plateau, native vegetation and no alien predators had very high numbers of ghost and hermit crabs compared to islands that have been drastically altered, or have suffered from invasive species like rats. Land crabs are therefore good indicators of habitat quality on tropical oceanic islands.