Saturday, 30 May 2020
HomeKnowledge centreNews and StoriesSwara Magazine: Nature Seychelles is building the reefs of the future

A small boat boldly emblazoned with the words “Reef Rescuers,” bobs up and down on the ocean off of Cousin Island Special Reserve, Seychelles. As the skipper Jacques steadies it, two other occupants, Paul Anstey and Chloe Shute, Nature Seychelles’ Reef Rescuers, prepare for quite an unusual job. They plan to tow a 24 metre rope fully laden with corals to a reef for transplantation without losing any in the water. The corals have been growing in an underwater nursery and are ready for transplanting. 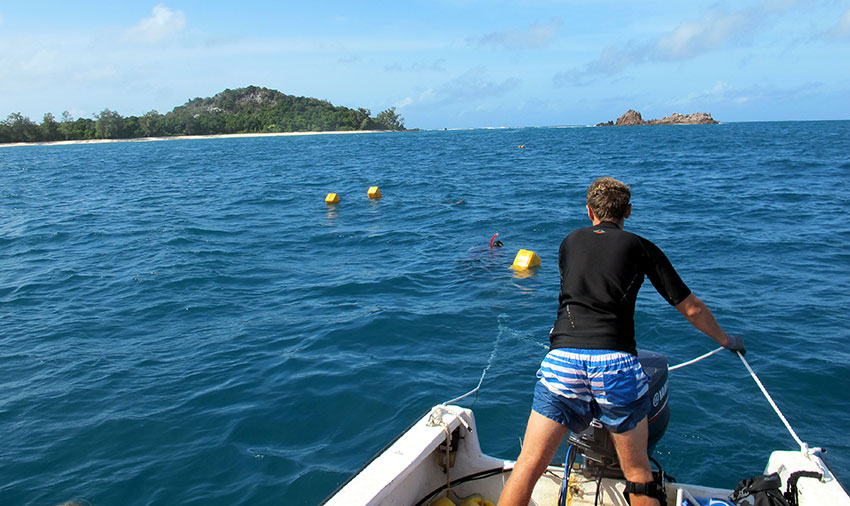 A single rope contains approximately 100 colonies, each the size of a football. “Which as you can imagine, is a significant weight for two divers to manage in the water,” Paul explains.

Careful planning has however ensured that the nursery is close to the transplantation site. “Too far away from the nursery and the current can swiftly drift us off course!” he says.

Buoyed by enthusiasm and several jerry cans attached to the coral rope and filled with air, the pair soon set off, rope in tow, towards the transplantation site.
A few metres from the site is a handy “cleaning station”: a set of 12 iron bars, 2 metres apart hammered into the sand. The pair dive to the station and gently hang their nursery rope. Curious reef fish will do the cleaning, feeding on any freshly accumulated algae.

Algae and other biofouling organisms quickly colonise the ropes that hold the corals, acting as direct competition. If not removed these organisms can encroach on the coral itself potentially causing extensive tissue loss and even mortality. A core task of the reef rescuers is to clean the corals in the nursery using toothbrushes, table knives and scrubbing brushes.

The pair ascends to prepare for the transplanting process, which involves attaching individual corals to the substrate.

It will be laborious and time consuming. But the reef restoration is in its eighth year now and the team of specialists and scientific diver volunteers has it down to an art. 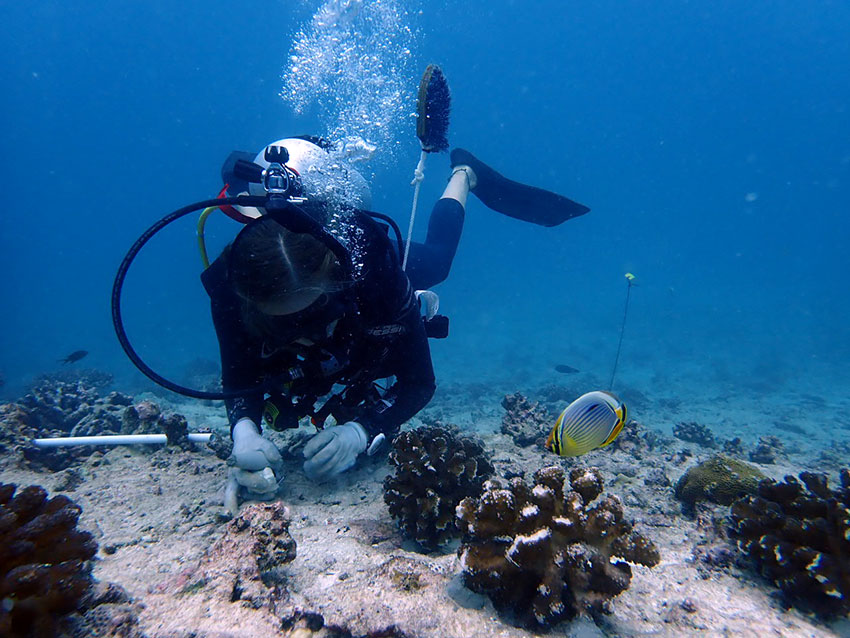 Ground-breaking
The pioneering project is the brain-child of Dr Nirmal Shah and is carried out by local NGO Nature Seychelles, the BirdLife partner in Seychelles.

The restoration is in one of the oldest marine protected areas in the Seychelles, Cousin Island Special Reserve, also successfully managed by Nature Seychelles.

Corals on the island’s reefs and others in Seychelles died-off and were reduced to rubble after the catastrophic 1998 El Nino bleaching event in the Indian Ocean. Seychelles’ damage was particularly bad: the Seychelles Bank was warmed beyond what most corals can survive. Surveys carried out nearly a decade later revealed it was unlikely for corals to recover on their own. It was clear that some intervention was needed.

Most people would be daunted by such a proposition. But not Shah, a “rubble rouser” (pardon the pun) who has led several large terrestrial ecosystem restoration projects in his country. He decided to move a never-ending discussion on coral bleaching to real action.

“At every marine science symposium I went to, there would be keynote addresses, plenary discussions or scientific papers on coral bleaching,” he tells me.
“One day I got up at a WIOMSA (Western Indian Ocean Marine Association) symposium and I said, ‘why don’t we restore coral reefs?’ This was more than ten years ago, and some people actually laughed at me. They said it couldn’t be done at a scale that is useful.”

In 2010, he took a bold step. With the financial support of the United States Agency for International Development (USAID), and later the Global Environment Facility through the Government of Seychelles, he launched an innovative programme that he called “Reef Rescuers.” It has achieved what was thought to be impossible: growing thousands of coral fragments in underwater nurseries, and transplanting a 5,500 square metre degraded area in a Marine Protected Area with these corals. 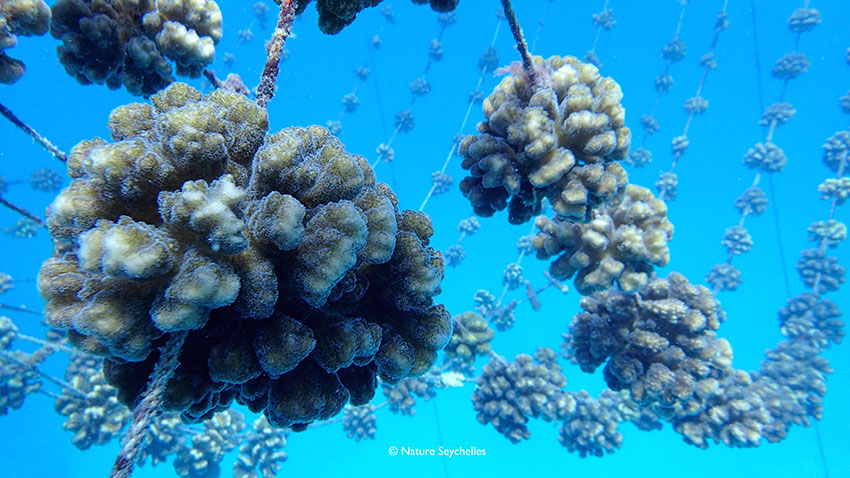 Teams of dedicated scientists cultivated healthy corals from healthy sites in underwater nurseries over the years. They tended them until they reached a satisfactory size, after which they transplanted them at pre-selected sites in Cousin Island Special Reserve.

“It’s amazing what we have accomplished in 7 years. I think for me it’s extremely important because it has validated my original idea that, yes, we can restore coral reefs,” Shah says.

Building reefs of the future
But Shah is hesitant to call what has been done “restoration.” He prefers to say his organization is building “designer reefs”. The idea is to restore ecosystem services rather than the species composition itself. “You cannot restore the ecosystem to what it was. So, in fact, we are creating novel ecosystems like we did with island ecosystems.”

The concept is not new. It is based on work Shah carried out in the Seychelles with BirdLife, which successfully re-established entire ecosystems for endangered birds.

“The coral reef that we have restored doesn’t look like the reef that was there before the bleaching event. We think - and we see already the impact - that it is the ecosystem services it provides that are the same as before,” he says.

Adapting to the inevitable
Coral reefs are extremely important for Seychellois livelihoods. The county’s economic pillars - tourism and fisheries - depend on healthy coral reefs. Reefs also provide barrier protection in times of storm surges, such as those that inevitably come about due to Climate Change.

This project was a game changer for Seychelles and coastal communities in the region because it provided an opportunity to innovate and to adapt to change.

“This is a form of adaptation and we have proven that it can be done at large scale,” Shah says.

“In the process, the project has discovered super corals that are probably bleaching resistant. That’s why it’s important.”

The project has received global attention but most importantly, crucial buy-in from stakeholders in Seychelles.

“A historic opportunity is at hand in the Indian ocean, with Nature Seychelles, to make positive and lasting changes in the way we manage, restore and rescue our reef resources,” predicted then US Ambassador to the Seychelles Mary Jo Wills during the project launch.

Looking to the future
Among those who have partnered with Nature Seychelles to restore reefs are two luxury hotels: The Constance Lemuria Resort on Praslin Island and Six Senses Zil Pasyon on Félicité Island.

The partnerships ensure sustainability. It is a model that has worked well with island ecosystems restoration. “We were able to hand over all our terrestrial restoration programmes to the island managers once completed. Cousine, Denis and Fregate islands - where we did extensive restoration in the past - all continue to run conservation programmes today,” Shah says.

We think that’s the way to finance conservation. It might work in the rest of East Africa where there’s tourism-associated wildlife.”

Shah has also opened, with a second grant from USAID, The Centre for Ocean Restoration, Awareness and Learning (CORAL) on Praslin Island to share knowledge and attract expertise. This will boost the knowledge already gained by 41 scientists and volunteers involved in the project. Nature Seychelles has developed a toolkit of techniques used and published scientific papers.

The scepticism has reduced considerably. Reef restoration is more acceptable now with countries like the USA and Australia carrying out similar projects.

“We get people coming to look at what we are doing. Scientists, media, students, divers, consultants.”

But he would like to get more attention for his project. “I’d like to see it continue especially in the popular media. Seychelles is so far away that people forget that we are doing amazing work here.” The work continues.

This article first appeared in Swara, the magazine of the East African WildLife Society, July-September 2018 Issue