The results of Nature Seychelles’ Reef Rescuers study on the survival of captive-bred giant clams in the wild, was recently published in Frontiers in Marine Science, an open-access academic publisher. The scientific study authored by Dr Sarah Frias-Torres, Reef Rescuers Research Associate, is an offshoot of and deemed an added approach in Nature Seychelles’ coral reef restoration work.

Through two experiments, the Reef Rescuers team wanted to not only ascertain whether the captive bred giant clams would survive in the wild, but also to strengthen the marine ecosystem - giant clams, alongside coral reefs play a vital role as “ecosystem engineers” but in recent years face extinction due to overfishing.

The experiments, which were devised and designed by Torres, were conducted between April and September 2014. These were conducted at Nature Seychelles’ large-scale coral reef restoration site within the marine protected area of Cousin Island Special Reserve.

Two sites were used for the experiment. One was a once degraded area due to past coral bleaching event and where the Reef Rescuers team had transplanted corals grown in underwater nurseries. The resulting ‘designer reefs’ have since been found to be more resilient to bleaching. The second site was a ‘healthy’ site with corals largely unaffected by the bleaching events, used as the control in the experiments. 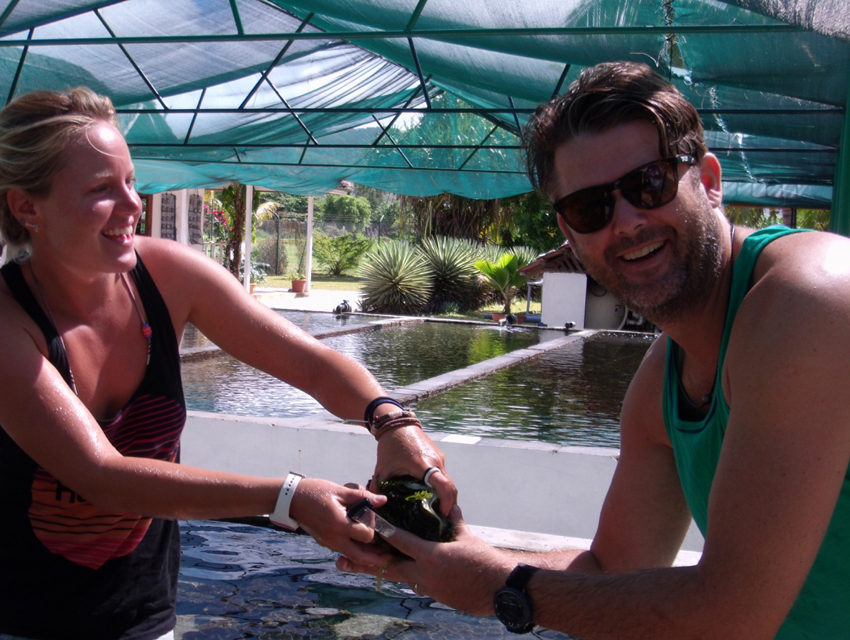 The giant clams were donated by Black Pearl Seychelles, an aquaculture facility based on Praslin Island which has been in the trade since the 1980s. The first wild clam stock they used was collected from islands throughout the Seychelles and released back into the wild after they had reproduced. Since then their stock has been self-sustaining.

In total, 150 captive bred giant clams were donated to Nature Seychelles for the two experiments. They were between 4 to 10 years old, had reached sexual maturity and were considered to have outgrown the ideal size for what Black Pearl normally exports to the international aquarium market.

Before being transplanted to the sites, the clams were measured and tagged. Thereafter, it was important to monitor the clams in order to determine whether they were behaving normally in the wild. It was established that they were opening their valves as needed in order to feed and take in oxygen. This was recorded using GoPro cameras strategically placed in the sites, recording for 3 hours at a time. The unmanned cameras also eliminated any possibility of human interference.

The video recordings showed only one Titan Triggerfish attacking two giant clams by ramming against the valves in an attempt to break the shell - it helps that unlike juvenile clams, adult giant clams are armoured with thicker shells that can withstand “shell-crushing predators”. No other fish species were recorded interacting with the giant clams.

In the first experiment octopus were responsible for the demise of some of the giant clams, especially in the control site which was older and therefore had a higher population octopus. The giant clams transplanted in June were also dislodged to due to the high wave swells common at this time of the year.1

In concluding, the report determined that “Although giant clams have been largely overfished in many Indo-Pacific coral reefs, the potential synergy between giant clams and corals should be further investigated to better understand coral reef resilience to thermal stress.”