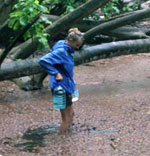 On New Year's day we shared a photo of a beautiful sunrise over Cousin on our Facebook page. The picture with its muted tones, calm sky and sea was very popular. Little did we know that things would be different in just a few days and the pictures from Cousin would tell a completely different story.Cousin was affected by the bad weather we've experienced in the past few days. Trees have fallen and roofs have been rattled. In the words of one of our staff on Cousin, it felt like someone was shaking our little island. "Honestly I was frightened the other night; we had a 2 hour bombardment of thunder and lightning!" another said. "My house got struck twice and the island is flooded."

The recently refurbished infrastructure however held. The staff were more than a little bit shaken though. On Wednesday night last week, when the bad weather first started, no one slept very well so most of them woke up 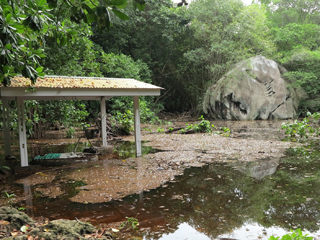 feeling rather tired and looking downcast, if you can pardon the pun.

Nature Seychelles took the usual precautions dictated by its operations procedures, one of which was to shut down the island to visitors.

The biodiversity in general fared well, with the Shearwater burrows up on Cousin's hill being the most affected. The burrows got flooded with water and a few chicks were found dead the following day.

"It's really sad as the chicks were getting really big now (after the previous nesting season)," says April Burt, the island's conservation officer.

But April and her turtle team are still being kept busy by Hawksbill turtles coming in to nest. The weather has not deterred them. It has however re-emphasised the importance of having a safe nesting environment for the turtles. On some of the nesting beaches, the soil has become soggy which could affect digging of nests and hatching success.

"Last year we had a couple of nests which became water logged," April says.

There has also been a loss of a number of trees where birds nest. The Seychelles warbler for instance are insectivorous and depend on some of the trees for food. Fairy terns nest directly on tree branches and Seychelles magpie robins have territories in the forest.

"Fortunately for us this has not been as bad as the storm that hit some years back that caused massive ecological damage," says Dr. Nirmal Shah, Nature Seychelles Chief Executive.

"On that occasion strong winds flattened everything in their path, roof tops were blown off, and huge trees fell, with hundreds of important trees being lost on the eastern plateau. It was a demonstration of the vulnerability of small island ecosystems," he says.

Nature Seychelles is keeping an eye on the situation. The island has been re-opened, but some of the trails are still water logged.

"For now we are waiting it out," says Eric Blais the island's coordinator who is assessing the infrastructure and getting things fixed.