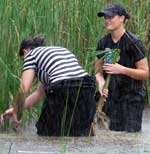 While heavy rain fell on Sunday the 30th October, 16 members of HMS Somerset Ship’s Company, including the Royal Marines, spent time at the the Sanctuary at Roche Caiman volunteering. HMS Somerset is a British Royal Naval ship conducting maritime security operations in the region and was on call at Port Victoria.

Seychelles enjoys good weather most of the year, its what its famous for. But it did not on this day. No sooner had the volunteers arrive at the wetland managed by Nature Seychelles than they were under the torrential rain that covered Mahe all day on that Sunday. 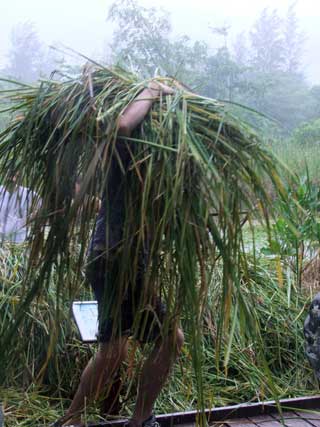 The rain caught the Nature Seychelles staff who hosted the volunteers by surprise. The volunteers however were very gracious, and stayed on the site for a couple of hours, doing solid work.

At first things went swimmingly, pardon the pun, and Robin Hanson who was coordinating the volunteer activities was busy directing work to be done.

He had asked one group to clear tree branches and creepers that overhang the fence that encircles the reserve. Another group was knee-deep in water collecting bunches of previously cut typha, the invasive and troublesome reed we have to keep under control. It is cut off at the base using a brush cutter but has to be removed; if left in the water, it rots and makes the water too nutrient-rich. Another group had been sent off to cut a tree at the end of the reserve. All was well and the volunteers got down to work.

Then the rain began and persisted throughout the three hours they were on site. Admirably, none of the volunteers shied off from the rain and the mud. They kept working, ferrying logs from one end of the reserve to the other and carrying off the typha to be used to make compost off the reserve. "They were so enthusiastic, hardworking, focused but also managed to make the day a really good laugh," Robin said.

It was their first time in Seychelles and the first time they had been involved in this kind of work, the team leader said. And at the end, and despite the rain, they managed a marvellous "wet and wonderful" to describe their experience at the Sanctuary. "Nature Seychelles was indeed honoured to have this dedicated group from the HMS Somerset working on the wetland," said Kerstin Henri, Nature Seychelles' Director for Strategic Operations.

On the following Monday, we were able to take stock of their contribution. Most of the wetland was flooded by then; our rain gauge overflowed past the 100mm mark. "But I was glad that some of the maintenance work that keeps the reserve in good shape had been done over the weekend," Robin said.

In June this year, the crew from HMS Monmouth were involved in similar work at the wetland. What a different experience they had; they escaped the great deluge.