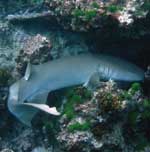 Shark attacks in Seychelles are so rare that even older fishers cannot recount "shark bites man" stories. So, the  first  record in over 40  years of a fatal shark attack has shocked the nation.

One of my vivid early childhood memories is going on board the Marswen a boat belonging to Harvey Brain, a friend of my Dad’s, and seeing the dead sharks he had on board. Like Jack Travis before him Harvey had been vacuuming the sea of sharks.  Another shark fishing venture, this one organized by the British colonial government, had also targeted sharks. So much so that when filmmakers came to Mahe in the 70’s to film part of the shark movie Blue Water White Death they couldn’t find the sharks they wanted. I remember going on an expedition with them in the vicinity of Port Launay and Cap Ternay and not seeing a single large shark despite the “chum” they were dumping.

Sharks have been severely overfished all over the world. A study published in the journal “Ecology Letters” in 2006 showed that the world's consumption of shark fins was more than three times higher than the official statistics of the UN’s Food and Agricultural Organization (FAO). The results demonstrate that as many as 73 million sharks are killed every year. Many shark species have become very rare.

So, the tragic death of a visitor apparently resulting from a shark bite at Anse Lazio, Praslin is as surprising as it is shocking.  In 2005 the demise of Rolly Lesperance, allegedly the result of a shark attack, also shocked the nation. But in fact only a tiny minority of sharks is known to attack man. Most sharks, unbelievable as it may sound, are harmless to people. There are only about 50 to 75 known shark attacks world-wide a year, and very few of these are fatal. In Seychelles shark attacks are so rare that even older fishermen cannot relate “shark bites man” stories.

What happened at Anse Lazio?  Indeed, there have been recent reports of fishermen landing some large Bull and Tiger sharks and lines being cut by big sharks. Where are they coming from? We can only speculate at this point. Perhaps changes in oceanographic patterns are causing large sharks to come in close to shore?

Some years ago I saw something that disturbed me. I had rented a catamaran with some friends and we were moored off Anse Lazio, along with at least 10 more of these bareboats. We were astonished to  see that “kaka” was drifting from the boats and attracting large batfish and other species. When I investigated I found that many of these boats do not have sewage holding facilities. Instead, everything just flows out. Could it be that sharks are being attracted  by sewage from these vessels when they moor off picturesque Anse Lazio?

But perhaps the truth is simpler. There have been persistent reports of sharks being fed so divers can see them up close. I’ve heard eyewitness accounts of foreigners chumming (putting blood and offal in the water) every day to attract sharks. The authorities should investigate this right away and put a stop to it.

This article first appeared in Nirmal Shah's column, Gaia, in the People newspaper on 5.8.2011