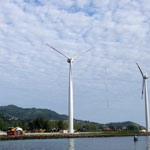 By N.Tirant, Today in Seychelles. At the opening of the Seychelles-Reunion sustainable energy fair yesterday I listened attentively to the Environment and Energy Minister Rolph Payet touting Seychelles’ green credentials. But I could not help but note that the minister forgot to mention those huge links that Seychelles has established with dirty fossil-fuel. Seychelles only very recently entered the renewable energy sector. Until the wind turbines became operational mid-year, polluting diesel generators have been the only source of electricity and we all use oil-powered vehicles. All this time the country has been spending billions of Rupees buying fossil fuels as well as the infrastructure needed to store and use the fuel.

As we curse climate change and blame the developed countries for continuing to burn fossil fuels and cause global warming, we have ourselves invested very little into renewable energies. Compared to our neighbours Mauritius and Reunion, Seychelles is far behind in terms of generating power from renewable energy sources.

In fact, by subsidizing the utilities provider and public transport all these years through the parastatal oil importing company we have encouraged a stronger dependency on fossil fuels through a national reliance on cheap rates for electricity and cheap fares for bus rides.

These policies in 2012 cost the company (SEYPEC) a total of SCR103 million, with SCR52 million and SCR4.1 million to PUC and SPTC respectively, and SCR47 million in LPG subsidy, explained the Finance Minister when he presented the 2013 budget in the National Assembly last year.

In addition, we have been very actively promoting oil exploration in our Exclusive Economic Zone as well as investing heavily in the transport and sale of oil.

One of the largest single investments this country has ever made in its history has been to build 6 oil tankers that ply the world carrying cargo that our own politicians admit is the reason for global warming. Whilst no definitive figure of the investment is readily available, some reports have estimated that the cost has been in the hundreds of millions of rupees – much more than would be needed to solve the country’s perennial water problem!

It is just these types of investments and partnerships that Seychelles has made in the fossil fuel industry which have played a role in preventing efforts to limit worldwide emissions and promote greener forms of energy.
“Seychelles has been kidnapped by the oil industry,” says one prominent environmentalist, adding, “We have allowed our public officials, funds and infrastructure to be used to subsidize and expand a dangerous, outdated energy model that only benefits the bottom line of oil and gas companies.”

As the saying goes, “it is never too late to do good!” provided, of course, the intention is to do just that! Now that we are deeply committed to sustainable development and renewable energy, will the discovery of an oil field in our waters take us back to our old ‘smoking’ days? Only time will tell.

This article initially appeared in the Editorial of Today in Seychelles on 26.10.2013. Reproduced with permission.