A computer games developer in the US, Britton La Roche, while theorising in order to build a games simulator has managed to cause panic by predicting a Tsunami on July 22, 2009. Nirmal Shah comments on how the media and the internet community have reacted as if this was a scientific fact and have managed to stir panic throughout Asia and the Indian Ocean region.

I have received panic emails over the last month about an earthquake predicted to hit Japan on July 22nd, which would trigger a Tsunami traveling as far as Seychelles Mauritius and the East African coast.

The prediction is based on one fact: a solar eclipse will take place on July 22nd 2009 directly to the south west of Japan. This eclipse according to the prediction circulating on the World Wide Web means that the gravitational pull of the Sun and Moon pulling together will do the following things.
1. Lift the earth’s tectonic plates in that region of Asia.
2. Cause the tide to rise more than usual.
3. Cause an underground molten magma tide to dip and raise the plates following the water tide.

On July 22nd 2009, according to this prediction, a 6+ Magnitude Quake will take place at 3:00PM Local Japanese time. This 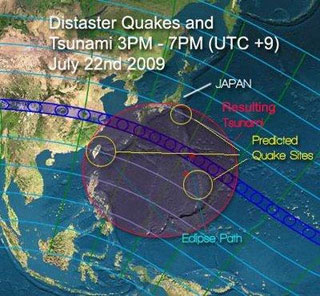 will be followed by two level 5+ Earthquakes and a Tsunami between 5:00PM and 7:00PM. The Tsunami will start out in the Pacific Ocean  and hit all the islands to the south west of Japan , Indonesia and  New Zealand and also  the Western Indian Ocean to Seychelles Mauritius and East Africa.

The prediction, outlined by a computer games developer called Britton La Roche in the US, is based on the following theory. A solar eclipse means that the moon is blocking the sun. The moon has enough gravitational pull to cause the tides and other natural phenomena on earth. The sun has enough gravitational pull to keep the earth in orbit. The theory is that during a solar eclipse, the moon has the Sun's added pull on the Earth's tectonic plates. When the Sun and Moon are together on one side of the planet, they can supposedly pull together and lift up the tectonic plate, just beneath the eclipse. This causes the plate to shift upward, and then an earthquake is generated when the lifted plate gets the little extra push (lift) it needed to move over its neighboring plate.

But this has been pooh poohed by the scientific community. The first to react was the Earth Observatory of Singapore (EOS). Dr. Kerry Sieh of EOS affirms on the EOS website that to date, scientists have not found any significant correlation between solar eclipses and earthquakes. Since 1900, for example, of 82 earthquakes greater than magnitude 8 worldwide, only two occurred close to the time of a solar eclipse.  However, these were not only partial eclipses but also far from the locations of the earthquakes.  Dr Sieh is visiting from the California Institute of Technology (Caltech) in the US. His principal research interest is earthquake geology. He, students and colleagues are studying the megathrust that produced the devastating giant Sumatran earthquakes and Indian Ocean Tsunamis of 2004 and 2005.

“Earthquakes are not caused by gravitational pull”, says Dr. Kate Hutton, a seismologist also at Caltech, reported by Snopes.com. Earthquakes are caused by the accumulation of strain in the Earth's crust, she adds.  The U.S. Geological Survey has also stated: "Neither the USGS nor Caltech nor any other scientists have ever predicted a major earthquake. They do not know how, and they do not expect to know how any time in the foreseeable future."

Professor Ian Main of the University of  Edinburgh, UK writing in the journal Nature about earthquakes says that in the USA, the emphasis has long been shifted to a better understanding of the earthquake process, and on an improved calculation of the seismic hazard. In Japan, particularly in the aftermath of the Kobe earthquake in 1995, there is a growing realization that successful earthquake prediction might not be realistic. In China, thirty false alarms have brought power lines and business operations to a standstill in the past three years, leading to recent government plans to clamp down on unofficial predictions, he says.

Dr. Chris Rowan a geologist specializing in paleomagnetism, also at the University of Edinburgh writes in his blog that “Any geologist would be celebrating a genuine, proven, method of earthquake prediction: but we're clearly not there yet. Right now, the best we can get is a hazy view of tectonic storm clouds building on the horizon, and we lack even the equivalent of a barometer, let alone advanced tools like weather satellites, to give us a more specific forecast. It would be irresponsible to claim otherwise.”

Poor old Britton La Roche has been dropped into the hot seat because he was simply theorizing so that he or others could think about building a Game Simulator. In fact on his blog he says “This is a theory and I have no background in earth science or seismology. In short, I have no valid qualification to back this prediction.” But the media and the internet community have reacted as if this was a scientific fact and have managed to stir panic throughout Asia and the Indian Ocean region