With tuna stocks worldwide in decline, the growing international demand for tuna, including illegal, unregulated and unreported fisheries, has put the rich tuna stocks of the region under serious threat. 70 to 80% of the Indian Ocean Tuna, worth 2 to 3 billion US$ annually, is caught in the Western Indian Ocean sub-region. WWF and WIOMSA are announcing a call for the development of Concept Notes for innovative research projects regarding the ecological as well as socio-economic challenges facing the Tuna industry in the Western Indian Ocean sub-region.

The Public Health Commissioner said Seychelles is on full alert as the world's largest and most deadliest E. Coli outbreak that has already killed 14 people in Germany and left 300 seriously ill, spreads to other northern European countries. It is believed the infection has spread as far as the United States of America. 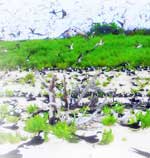 The seventh issue of the Seychelles Seabirds Group newsletter is out and is available for download. This issue contains a follow-up article on the breeding of Black-naped Terns on St. François atoll in the southern Amirantes; information on a new experiment to start soon on Bird Island with Sooty Terns being equipped with geo-locators and the preparation of a new area on Cousine Island for the next Sooty Tern breeding season. Cousin Island presents its latest seabird survey results and Aride Island highlights some of the latest news on seabirds.

April 29th 2011 - Seychelles and Mauritius have received official notification from the Secretariat of the United Nations (Division for the Ocean Affairs and the Law of the Sea, Office of Legal Affairs) that following a Joint Submission both countries will now have jurisdiction, as provided under the United Nations Convention on the Law of the Sea (UNCLOS), over an extended Continental Shelf of 396,000 sq. kilometers in the Mascarene region outside the border of their two respective Exclusive Economic Zones (EEZs).